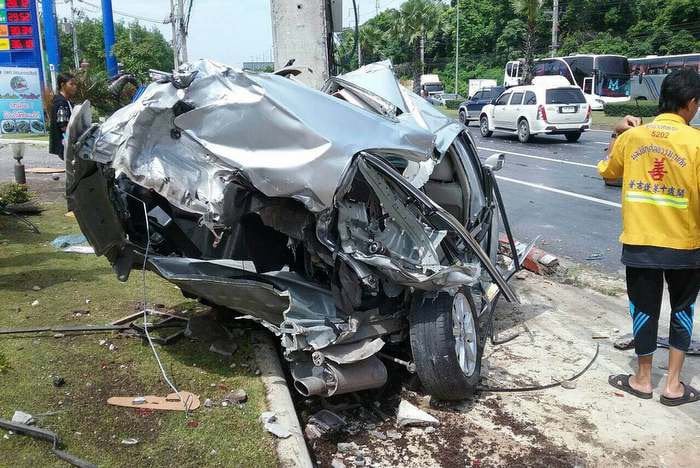 PHUKET: Three motorists narrowly escaped serious injury in Phuket when a motorbike driver fell off her bike and caused a chain-reaction accident on Thepkrasattri Road yesterday.

Thalang Police arrived at the scene to find major traffic tailbacks in the southbound lane, a totalled Toyota sedan wrapped around a utility pole, a badly damaged pick-up truck and motorbike in the middle of the road.

“Witnesses to the accident saw Ms Nadia fall off her bike after she turned out of the PTT gas station. The pick-up truck driver, who was heading straight, slammed on his brakes to avoid hitting Ms Nadia,” said Lt Wichote.

“The car driving behind the pick-up truck crashed into the back of the truck and spun around before colliding with the pole.”

All the vehicles, and their drivers, were taken to Thalang Police Station for questioning.

“We must further investigate the circumstances of the accident before charging anyone for the damages,” said Lt Wichote.