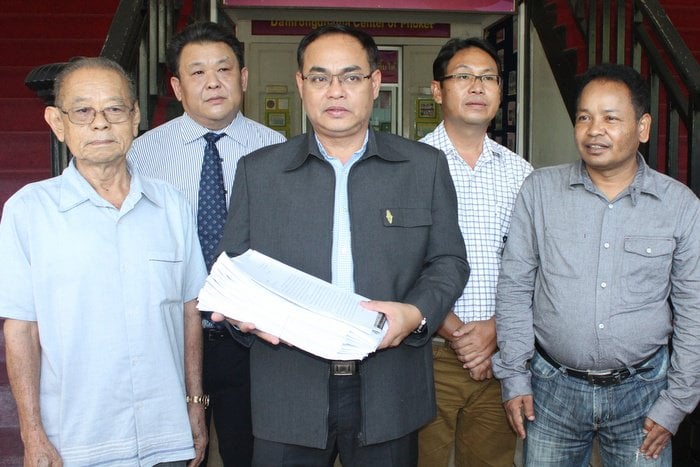 PHUKET: Chalong landowners have asked island officials for justice and transparency in an investigation into a complaint filed by locals earlier this month claiming that the landowners had sent ‘men in black’ to threaten them for encroaching on the land.

Samran Sanyanuphap and Sulak Kunarak, two of the landowners listed on the Chanote for the disputed 70 rai of land in Chalong, and their lawyer, Suthon Thaweesuvann, went to the Damrongtham Center (ombudsman’s office) Friday to insist that they never sent anyone to threaten the villagers.

“We need officers to help us make it clear that these are the legal owners of the land and that my clients have never sent anyone to threaten locals, even though the villagers are illegally encroaching on the land,” said Mr Suthon on behalf of the landowners.

“We have been fighting the encroachment and trying to negotiate with the Sra Ton Po villagers for years.”

“There have been numerous complaints over the land. As a result, land officers checked into the title and proved it was legal,” Mr Suthon explained.

“Originally there were four Chanotes. However, in 2012, these four were combined into one.”

In 2013, Mr Prajit met fierce opposition from villagers when he rebuffed their claims that the property was an unowned ‘wasteland’ and tried to stop them from developing the land (story here).

It took a total of 60 officers and the land title deed to calm the villagers, who were concerned that their efforts in developing the property, including the construction of 10 homes, would be dashed.

After the incident, Mr Prajit requested that the Land Office re-survey the property to confirm his legal rights to the land.

“The Land Office re-surveyed the land and proved that it belongs to the owners listed on the Chanote,” said Mr Suthon.

The landowners have since taken legal action against the squatters. There are about 90 cases total, 10 of which have already been judged by the court.

“Rornmae Sangkhao, head of the Sra Ton Po community, has already received a jail sentence for encroachment. That case is now in the appeals process,” said Mr Suthon.

Mr Rornmae, speaking on behalf of the villagers on Tuesday, said that the villagers were hesitant to leave because they had been living on the land since 2003, years before the owners came forward with a Chanote in 2013.

“We moved here because the area was abandoned after a mining concession for this plot of land ran out. We lived here for many years before any owner came along with documents,” he said.

Mr Suthon denied that there were any concession for his clients’ land, saying that the permit presented by villagers for the mining concession was for a different plot of land.

Some of the villagers have since moved off the land, but many others have cases that are still in the legal system.

“We dropped our complaints against those who moved off the land. However, there are many cases that are still in the court, as we have been unable to negotiate successfully with the encroaching villagers.”