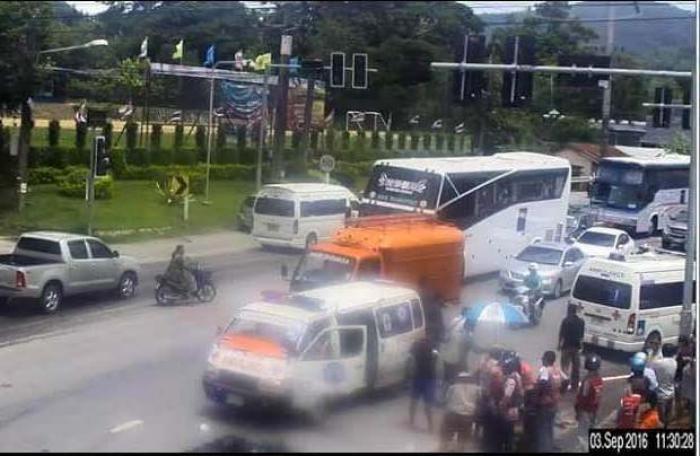 PHUKET: A motorcyclist was killed in Chalong on Saturday when a CRV driver ran a red light and crashed into him.

CCTV footage from Chalong Municipality shows the CRV crashing into the motorbike at the T-junction in front of Baan Chalong School on Cha Fa West Road. The bike rider, Wattana Enkbuth, was thrown off and his head hit the ground. He died instantly.

A crash helmet was found at the scene. The CCTV footage revealed that Mr Wattana was not wearing the helmet at the time of the crash. It was in the motorcycle’s basket.

The CRV driver, whose name is being withheld by the police, was criticized for ‘trying to escape’ and ‘not helping the victim’. However, Chalong Police Lt Chanat Hongsittichaikul clarified that the driver surrendered to police on the spot.

“He did not try to escape and waited at the scene to surrender. Therefore, we will not reveal his name,” said Lt Chanat.

“He was charged with reckless driving causing death, property damage and disobeying a traffic light,” he added.