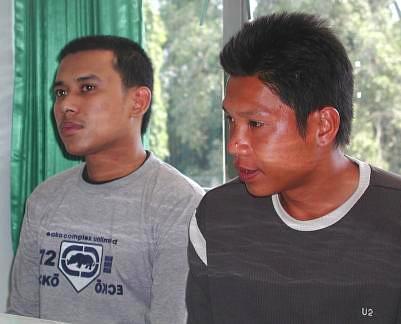 PHUKET TOWN: After a two-month manhunt, Phuket Town police have arrested fugitive gang leader Noparat “Ae BorKorSor” Boonyong and an accomplice. The arrest of the notorious 24-year-old, at the top of the police most-wanted list, follows a shootout outside the Lucky Complex in Saphan Hin in August, in which police killed two members of Noparat’s gang but were unable to prevent the leader slipping away. Despite being at the top of the most wanted list, Noparat returned to the island to be near his girlfriend and was located by police at the Taladnua home of a new partner in crime, 19-year-old Tossapon Gaewtong. After several days of surveillance, police raided the home at 5 am on Saturday. In a press statement, Pol Col Paween Pongsirin, Superintendent of Phuket Town Police Station, said he was delighted that the arrests came without incident, especially given the violent nature of the August confrontation and the suspect’s reputation. Col Paween said that Noparat was known to kill people simply for looking at him the wrong way. He added that both suspects had already confessed to charges of illegal possession of a hand grenade. Noparat was also charged with conspiracy to commit murder. Numerous additional charges are expected to follow. Although it was Tossapon’s first arrest, Noparat was also wanted in connection with numerous assault charges, rape and bag-snatching. Most of the BorKorSor gang are now behind bars, though a few fugitive members are still at large and are thought to have left the island. The gang members called themselves the “BorKorSor gang” because they used the area around the Phuket Bus Station as a base for their criminal activities.

Bus passes to be launched in December