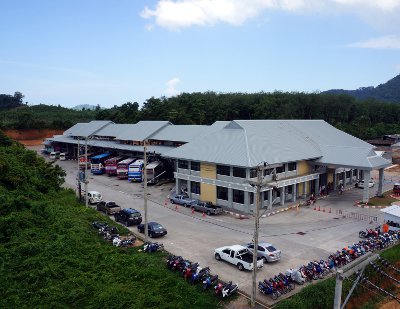 PHUKET: The committee responsible for operation of Phuket Bus Terminal 2 say the station will soon get additional parking and CCTV cameras.

The announcement came following a meeting on Thursday of the ten-person committee that oversees operation of the station, which opened in April this year, 28 months after it was completed.

Phuket Land Transport Office (PLTO) chief Teerayut Prasertpol told the Phuket Gazette, “New parking areas, including a large lot behind the terminal building, are nearly finished. When completed, they will solve the problem of taxis and public transport taking up all the available parking space.”

The new car facilities will have space for about 100 taxis and other public transport vehicles, thus freeing up about half of the existing car park for private vehicles, he said.

“We have an idea to collect parking fees from those drivers who park their vehicles at the terminal for an extended period. We think it’s worth considering, but have yet to work out the details, such as how much and for how long.”

“The installation of 30 CCTV cameras, covering the entire facility, has been included in the provincial plan to have an island-wide, integrated CCTV security system,” he said.

“We are looking for contractors to conduct site surveys and install the cameras and associated equipment.”

“It should not take that long to get the CCTV system operational,” said chief Teerayut.

CCTV coverage is considered a key in the war against drugs. In the past, many consignments of drugs, especially ya ice (crystal methamphetamine) and ya bah (methamphetamine in tablet form) were intercepted at Bus Terminal 1 in Phuket Town.

They typically arrived there in unaccompanied parcels sent as cargo on regularly-scheduled buses, the operators of which offer freight as well as passenger services.

Former Rassada Mayor Surathin Lianudom, who lives right across the street from the station and was largely behind the delay in its opening, cited the possibility of his neighborhood becoming a drug entrepôt as among the many reasons for his resistance to the station opening.