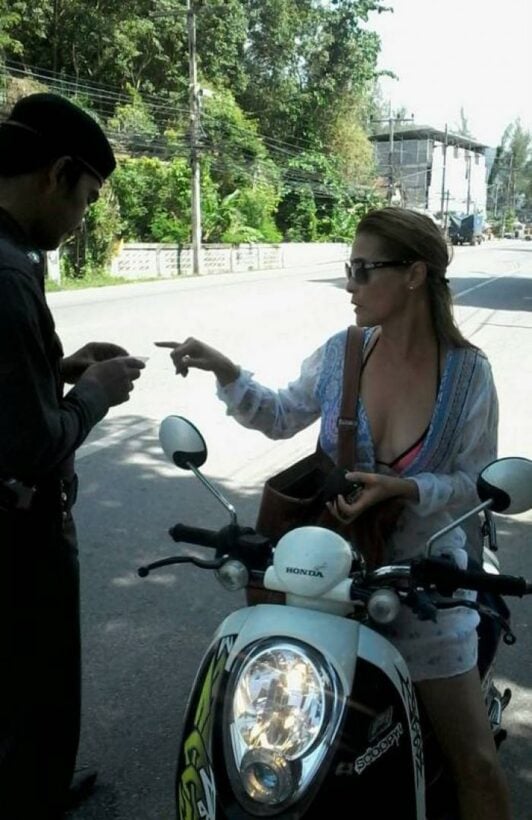 PHUKET: Phuket traffic police made 64 arrests in the first week of the ‘One district, One road, with 100 per cent helmets’ campaign.

The new campaign was launched on February 1 in an effort to improve Phuket’s road safety. Helmet-less drivers caught at checkpoints across the island had their bikes seized and were escorted to the police station to view road accident videos, purchase a 99-baht helmet, and pay a fine (story here).

“Thung Thong Police have set up a checkpoint on Phra Barami Road, located just before the hill leading from Kathu to Patong,” said Sirisak Skoonsorutcha, chief of the Phuket office of the Department of Disaster Prevention and Mitigation (DDPM).

“Every day, we changed the time we conducted the stops,” said Mr Sirisak.

Officers in Thalang made 30 arrests, which is the highest in the campaign, Mr Sirisak said. These include 19 arrests at the Tah Chat Chai checkpoint and 11 at the Thalang Police Station.

“We have received strong cooperation from police for this campaign. After one month, we will call in officers from each station to provide their feedback and suggestions,” Mr Sirisak said.

The discussions at the meetings will cover why drivers do not want to wear helmets, as well as people’s reactions to watching the videos.

“We hope this will lead to an increase in the number of people wearing helmets and decrease the rate of road accidents in Phuket,” Mr Sirisak said.