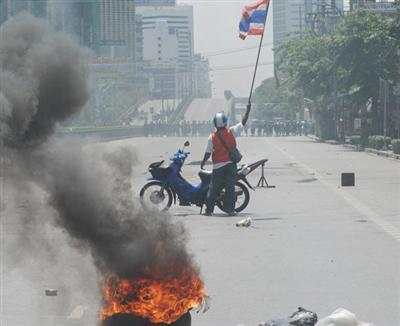 PHUKET: More Phuket people are joining the red shirt protest in Bangkok, one of the leaders of the Phuket United Front of Democracy Against Dictatorship (UDD) told the Gazette today.

“At the beginning, more than 400 people from Phuket had come to join the protest. Before last night’s fighting, about 100 were left,” Phuket red shirt leader Wisut ‘Ae Inside’ Tangwittayaporn said.

But following last night’s clashes, more Phuket people were on their to Bangkok to join their red shirt comrades, Mr Wisut insists.

“I just got back from the fighting at Bonkai this morning. We are staying at three different points – at Ratchaprasong, Bonkai and Din Daeng Junction. I’m doing well,” Mr Wisut said.

“None of us [from Phuket] were injured or  killed in the fighting and we will stay until the protest is over.

“We’re not sure how many people came up from Phuket, as they separated and have been staying at the three points. Right now, I’m also trying to check exactly how many Phuket people are taking part so I will know who to check for if anything happens.

“I have been here since March 12. We have lots of food donated by people who keep sending it to us.