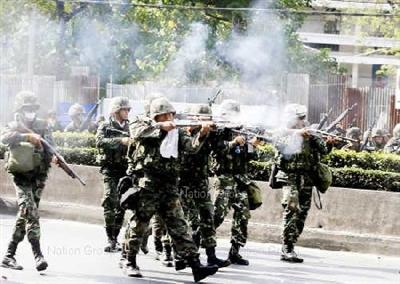 PHUKET: The Bangkok Metropolitan Administration’s Emergency Health Center this morning revised its death and injury toll from yesterday’s clashes between troops and protesters, to 16 dead and 157 people injured.

Andrew Drummond, a British journalist with decades of experience in reporting news in Thailand and Southeast Asia, told the Gazette that the capital seemed “much quieter” and traffic seemed to be resuming this morning. But he quickly added: “But it is still quite early in the day.”

Last night’s clashes, which he described as “bloody mayhem”, continued well into the night, with skirmishes reported all the way from Suan Plu to Din Daeng continuing until well past 1am.

Describing the scene of the army confronting red shirt protesters breaking out of the “containment zone”, Drummond said, “I thought the military were quite restrained. There were some very ugly incidents, and the army replied by shooting into the air, but of course they weren’t always shooting into the air…”

“I think the idea was to keep the area contained and to not let any red shirts who left the ‘box’ back into the area, which I think they [the army] managed to do.”

Seasoned fellow journalist Nelson Rand was shot in yesterday’s clashes. He was last reported to be in ‘grave condition’.

Speaking on journalists in the line of fire in Bangkok, Drummond said, “I don’t think reporters should be running with red shirts. You have to go down to the zone to be able to report what’s going on, but once you start mingling with one side or the other, then if someone beside you does something naughty you could take the punishment for it.”

As for the root cause that has spurred the red shirts to riot, he said, “They’re on the democracy ticket, but who would they vote into power once they got it? The same old politicians who have been screwing up the country for the past 20 years?

“The world seems to want to think it’s a people’s revolution, but it is very difficult to convince a lot of people over here [in Thailand] that it’s a genuine one.”