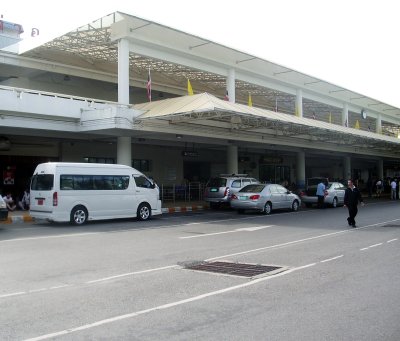 PHUKET: The Transport Ministry has formally approved a request by Airports of Thailand (AoT) to increase the number of taxis and vans that can operate at Phuket International Airport by 60.

News of the approval came at a meeting chaired by Phuket Vice Governor Nivit Aroonrat at Phuket Provincial Hall on Friday morning.

Phuket Land Transport Office director Kanok Siripanichkorn told the meeting that a letter from the Interior Ministry arrived in Phuket on July 12 confirming that the AoT’s request for the increases had been formally approved by the Ministry of Transport.

The deal came during an emergency meeting at the airport following complaints by the PBC that PMK had been unjustly awarded the right to operate 30 more limousines at the airport.

Under the compromise agreement now approved, the PBC’s 30 new passenger vans will raise its fleet total to 180 vehicles: 150 taxis and 30 minivans.

Phuket Mai Khao Sakoo will have 110 vehicles: 50 minivans and 60 taxis.

The new vehicles will be allowed to operate without an increase in concession fees until the two groups’ current concession contracts expire.

The PBC contract ends September 12, while the PMK concession runs until January 11 next year.

The Gazette called PMK manager Rungroj Chaipiban, who said he was aware of the approval. PMK would move as quickly as possible to have the new taxis in service by early next month, he said.

The Gazette also called the PBC office, where a staff member said the new vans were already in service and had been “for a while”.