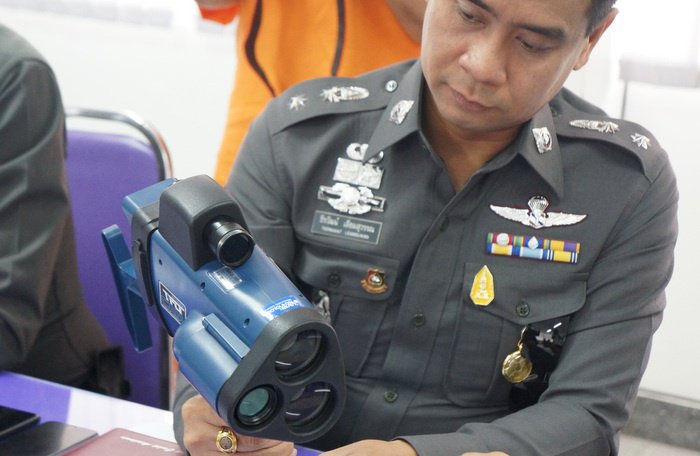 PHUKET: The Phuket Provincial Government has asked that the Royal Highway Police step in to help bring the deadly chaos on Phuket’s roads to a potentially manageable level.

“There are three types of factors that lead to the number of accidents on our roads: the driver, the vehicle and road conditions,” said Vice Governor Chokdee Amornwat last week. “We are focused on cracking down on issues with drivers, such as reckless driving and drunk driving.”

The Royal Highway Police will be asked to join the Phuket Land Transport Office (PLTO) in setting up mobile speed traps to catch drivers who are aware of the locations of the four stationary Phuket speed cameras.

Phuket Provincial Police Commander Teeraphol Thipjaroen recently revealed that 10 drivers a day are booked by the stationary speed cameras, which came online in 2013 (story here). However, only about 30 per cent of those issued a fine pay it (story here). Within the last two months, there has been no legal against those who failed to pay the fine.

“To solve the problem, we have to play tough. We need to force them to pay the fine or go to court, rather than just sending their names to the PLTO in hopes that we can take some sort of action against them without following the legal process,” PLTO Chief Policy Adviser Jaturong Kaewkasi said.

Once the driver has been fined and been through the legal process, his name should be sent to the PLTO so that the office can consider suspending his yellow or green license plate – assuming the vehicle is a commercial one – explained Vice Governor Chokdee.

“This will make them much more afraid than simply having to pay at most a 1,000 baht fine,” he said.

A number of efforts, including drunk driving quotas, have already been implemented in Phuket to tackle issues revolving around road use while under the influence (story here and here).