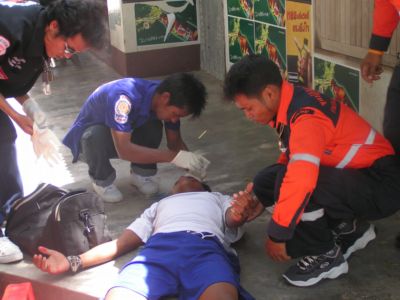 PHUKET CITY: Mock tsunami evacuations at Baan Laem Tukkae and Saphan Hin were staged on Friday and Saturday, but with voice announcements that could not be understood and firetruck sirens instead of the tsunami warning towers alarms.

However, government officials have insisted that the “quiet” testing was intentional to avoid panic.

The tests, on Friday in Baan Laem Tukkae and Saturday at Saphan Hin, were held in preparation for a July 25 test throughout the six Andaman provinces.

At Laem Tukkae, about 15 volunteers took part in the mock evacuation, including several who feigned injury to allow rescue crews from the Kusoldharm Foundation to practice helping citizens to escape tsunami strikes.

The tsunami warning towers sounded the alarm, although people taking part in the drill could not understand the voice warnings.

Despite assurances from of Department of Disaster Prevention and Mitigation (DDPM-Phuket) Chief Aroon Kerdsom that the sirens would be triggered from the National Disaster Warning Center (NDWC) in Bangkok to fully test the system, the sirens were set off from Phuket City Municipality offices.

The following day at Saphan Hin, about 30 volunteers fled from a mock tsunami as rescue volunteers again practiced retrieving victims.

However, instead of the tsunami warning towers sounding the alarm, a firetruck with a wailing siren cruised the streets.

Dismissing reports that wiring had been stolen from tsunami warning towers at Saphan Hin, K. Somkid said that the missing wires had no effect on the sirens since the towers are solar- and battery-powered.

The July 25 tests will be triggered in Bangkok, K. Kerdsom asserted, and will include about 100 towers in the six Andaman coast provinces.

Phuket to have biggest aquarium in Southeast Asia