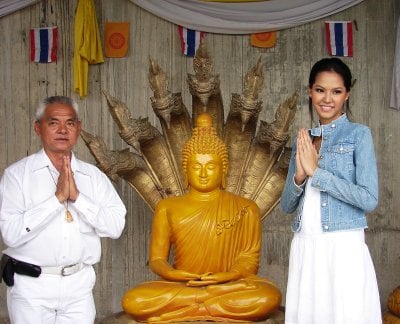 PHUKET: Heads were turning yesterday as Miss Thailand World 2010, Sirirat ‘Noo Si’ Rueangsri, paid her respects to the Big Buddha image high up in the Nakkerd Hills in Phuket.

Ms Sirirat, a 22-year-old law student from Chiang Mai, was in Phuket for a one-day visit to fulfill a promise she made to herself to revisit the site if she won the Miss Thailand World 2010 pageant in Bangkok.

The trip to Phuket became obligatory when she was crowned Miss Thailand World 2010 on August 14.

Ms Sirirat arrived at Phuket Airport with her aunt at 10am and went straight to the Big Buddha, officially known as Phra Puttamingmongkol Akenakkiri.

“I once visited here when I was a contestant participating in a one-month training camp in Phuket before the final round of Miss Thailand World, but I missed the chance to pray before the Big Buddha image,” she told the Gazette.

Due to a tight schedule, she only had time to visit the entrance pavilion.

“I prayed for success in the contest, vowing I would return here and never eat meat again my entire life [if I won],” she said.

Suporn Vanichkul, chairman of the Mingmongkol Faith 45 Foundation that built and maintains the image, was more than pleased to show Ms Sirirat around the site and explain its history.

He proudly introduced Miss Thailand to tourists eager to have photos taken with the young beauty.

Ms Sirirat was impressed with the vista from the hills of Phuket Town and local beaches.

“The view is so amazing and the water is so clear – such a beautiful place,” she said.

Speaking of the vegetarian vow she made, Miss Sirirat said, “People think it is hard to go without meat forever, but I think I was so lucky to be born a human that I should refrain from harming other lives. I’d also like to advise young people not to think of religion as something that is out of touch or out of reach, but actually a part of daily life. You should hold the Lord’s [Buddha’s] teachings in mind and luck will be with you, your family and everyone you know.”

Miss Sirirat will leave Thailand on October 1 to represent Thailand in the Miss World 2010 competition in Sanya, China, where the new Miss World will be crowned on October 30.

“I will try my best to present Thai culture to the world. Although there is no award for ‘national costume’ in the pageant, my Thai-style costume will attract attention with its authentic traditional style,” she said.