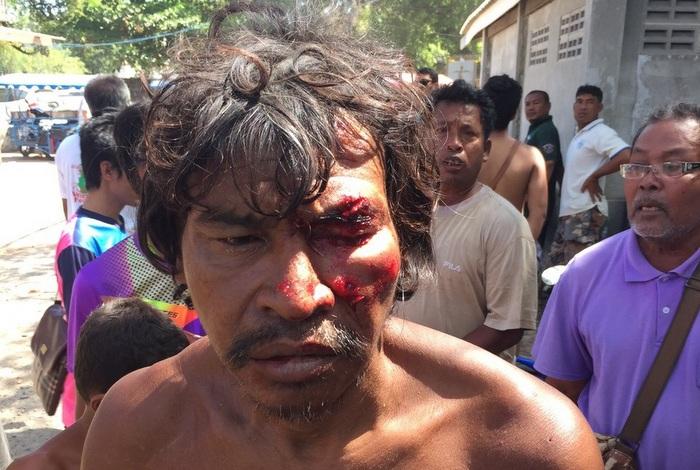 PHUKET: A total of twelve sea gypsies and human rights activists have been summoned by the 41st Military Circle for questioning about an on-going land dispute between Baron World Trade Company and a sea gypsy community in Rawai.

An official letter, issued on April 20, was sent to Rawai sea gypsy community leader Ngeem Damrongkaset. It summoned nine sea gypsies and three activists before the 41st Military Circle in Nakhon Si Thammarat today. However, that summons was postponed to May 10.

The letter stated that the 12 individuals took part in a demonstration in Rawai on January 27, which
was in defiance of the National Council for Peace and Order’s (NCPO’s) ban on political congregations.

More than 30 people were injured during the violent clash between sea gypsies and the private investors, who were attempting to work on the development of the disputed beachfront land on January 27 (story here).

On March 2, more than 200 sea gypsies again prevented Baron World Trade Company from building a wall that the once-nomadic people claim would prevent them from reaching a ceremonial site on land for which the company holds a Chanote title (story here).

Mr Ngeem told the Phuket Gazette that the sea gypsies plan to fully cooperate with the 41st Military Circle’s summons.

“This may give us a chance to explain everything to the military, the whole history and the origin of the dispute,” Mr Ngeem said. “Perhaps they can help us.”

In 2014, the Department of Special Investigation (DSI) confirmed that DNA evidence from skeletal remains unearthed in the sea gypsy village backed their claims that the seafaring nomads have called Rawai Beach home for more than 100 years (story here).

The military is calling the sea gypsies in for questioning in order to better understand the situation, confirmed 41st Military Circle Chief of Staff Manot Jankiri.

“We have seen that the problem is never ending,” Col Manot said. “The sea gypsies are preventing the land owners from developing the property. We do not want to see a rally happen anywhere within our jurisdiction. Therefore, we must get involved and find out what is going on.”

Col Manot said that after hearing from the sea gypsies, the 41st Military Circle will hear from Baron World Trade Company.

“We want justice for both sides,” Col Manot said. “After questioning the parties, we will submit the issue to the NCPO to see if we can resolve the situation.”