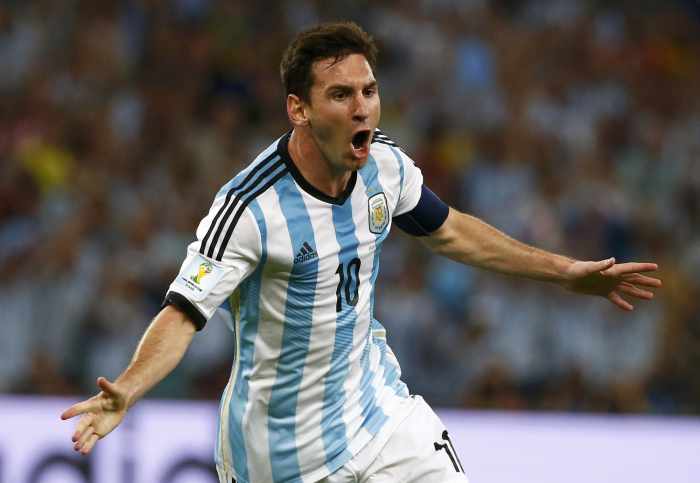 PHUKET: Lionel Messi finally made his mark on the World Cup and lit up the Maracana with his first goal in the finals for eight years as Argentina were forced to battle for a 2-1 win over debutantes Bosnia in their opening Group F match on Sunday.

Messi, four-times world player of the year and Argentina’s best footballer since Diego Maradona graced the 1986 tournament, put his side 2-0 ahead on a night when the stadium was turned into little Buenos Aires by tens of thousands of his countrymen.

Although they took the lead in the third minute when Sead Kolasinac netted the fastest own goal in World Cup history, Argentina looked unconvincing until Messi struck with a dazzling run and sweet left-foot shot that went in off the post in the 65th minute after a one-two with substitute Gonzalo Higuain.

It was Messi’s first goal in the finals since scoring in Argentina’s 6-0 win over Serbia & Montenegro almost eight years ago to the day.

Even then they could not afford to relax as substitute Vedad Ibisevic scored in the 85th minute for Bosnia to set up a thrilling finale.

“In the first one I think we controlled the Bosnians well, but beyond that, we didn’t create the kind of depth that we managed in the second half. Obviously we need to improve.”

The match began dramatically when Kolasinac put through his own net after two minutes eight seconds, beating the previous unwanted record set by Paraguay’s Carlos Gamarra against England in 2006 by 38 seconds.

He was in the wrong place when a Messi free kick, headed on by Marcos Rojo, hit him and went in.

Bosnia, naturally shaken after making such a bad start to their first ever match in the finals, did not dwell on their misfortune for long.

After surviving a nervy spell, they began to look the better side against a subdued Argentina team who were in danger of losing their record of winning their opening match in their last five World Cups.

Messi, whose tepid displays in the last World Cup in South Africa when he failed to score have been exhaustively documented, made little impression until his goal and Bosnia had their chances with both Senad Lulic and Edin Dzeko going close in the first half.

Substitute Ibisevic scored Bosnia’s first World Cup goal when he shot through Sergio Romero’s legs, but it was too little too late.

Bosnia were far from outplayed, however, and capitalized on a cautious safety-first approach from Sabella in the first half.

Playing with five at the back against lone striker Dzeko and with Sergio Aguero and Messi getting limited service in attack, Bosnia dealt with their more illustrious opponents with relative ease.

Muhamed Besic did a good policing job on Messi who was largely anonymous in the first half.

Sabella changed his formation at halftime, introducing Fernando Gago in midfield and Higuain in attack but in the end it was Messi’s magic, as so often is the case, that made the difference.

“The objective was to play as well as we can against Argentina, who are the favorites to win the World Cup, and I think we played a good match,” Bosnia coach Safet Susic said.

“We played well in both halves and it was only because of the psychological pressure that we looked as if we had run out of steam a little bit in the closing stages.”