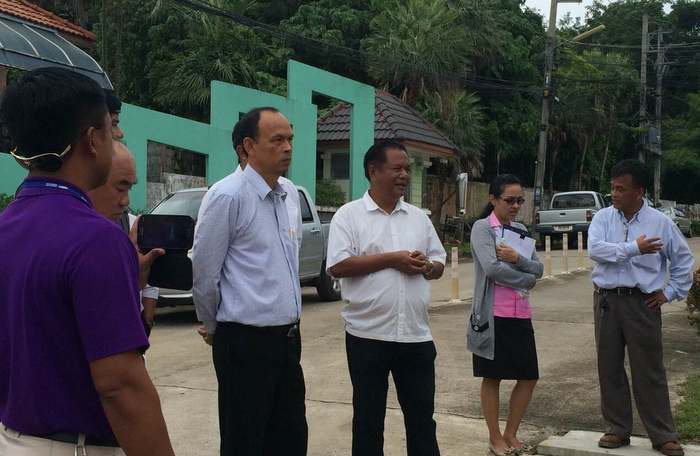 Vice Governor Somkiet led officials to inspect the homes on Tuesday after homeowners filed a complaint to Governor Nisit Jansomwong that officials had failed to compensate them within a 60-day time period to which they agreed on May 12 (story here).

“In 2013, the municipality hired a private company to construct the ditch at Soi Bang Chee Lao. The company dug up land much too close to the walls of seven houses, causing the walls to collapse,” said Treeyamat Srinuon, 40, an owner of one of the damaged homes.

“Municipality officials earlier told us they would pay about 900,000 baht to build new walls, but the payment was never made and no one has rebuilt our walls,” he added.

After the inspection, V/Gov Somkiet said that the construction of the drainage ditch must continue, but Rassada Municipality must pay compensation or repair the walls within two months.

“If the municipality fails to compensate the homeowners, we will consider filing a complaint with police,” he said.

“The municipality must make sure that such problems do not happen in the future and relevant officials must oversee the project closely to prevent any further damage.”

Underpass contracts to be inked on Monday