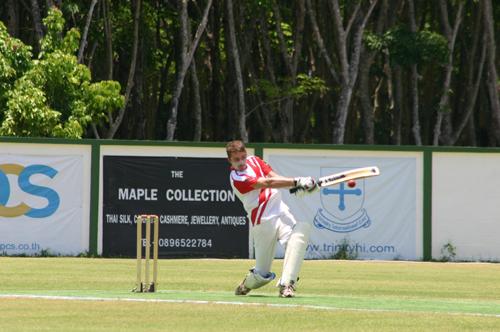 Eighteen teams from around the world have been competing in glorious sunshine over the last four days at the Alan Cooke Ground (ACG), in the ICC award winning, Asia Escape Phuket International Cricket Sixes. All teams played on finals day of the six-a-side cricket competition, and some incredible cricket skills were on show at the picturesque venue.

The Spoon final was an all Hong Kong duel between experienced sixes campaigners, Lamma CC, and the hot shot team of the Hong Kong Cricket Festival, the Hong Kong Blues. Batting first, despite a ferociously quick first over, Lamma put on a score of 68 without loss. They drew on their experience to defend their total and the Blues fell short of the target, Lamma taking the Spoon in Phuket for the first time. Mark “Monty” Burns was presented with the Player of the Final award for his 25 not out and one wicket for seven runs.

The Plate final proved a popular win for the local players of the Phuket Cricket Group who had played hard competitive cricket throughout the tournament and defeated Pinjarra from Australia in the Plate final. David Watson was Player of the Final for his 33 not out and one wicket for five runs from his over.

Mahmood Abdullah again arranged for two teams from Kuwait to fly in to Phuket and compete at the Sixes, and both sides reached finals. Up first were the MG Warriors who played Southern Stars from Victoria, Australia in the Bowl final. Both teams had been going great guns throughout the tournament and featured match winning players. In the end, the Kuwaitis deservedly triumphed after a controlled bowling display restricted the Aussies to a modest 57 runs, which MG Warriors knocked off relatively comfortably led by some breezy shots from Johnny, for a popular victory. Mitch Younger of the Stars picked up the Player of the Final award for his performance of 23 not out and 11 runs from his over.

The other Kuwaiti side in the tournament, defending champions MG7, scored a fantastic victory over the CBB Wolfpack in the Cup semifinal when they bludgeoned and defended 98 off the fancied Australian side, featuring Aussie international indoor cricketer, Will ‘Alter Boy’ Badger, to send them into the Cup final. They were up against the Melbourne Super Kings making their debut at the Phuket Sixes. The Aussie outfit batted first and devastated the Kuwaiti bowling attack, racking up 98 runs which they then capably defended despite the best efforts of MG7. It was a classy match full of top drawer shots and power bowling, and Melbourne were good for their Cup victory. Player of the Final was awarded to Ramesh of the Super Kings.

Mark Stirling of the Wild Men From Borneo, who featured two sides in the tournament and the largest shot box ever seen, was awarded the prestigious Spirit of Cricket Award.

A fantastic awards dinner ‘under the stars’ was held for all teams and officials at the fabulous Kata Beach Resort.

Player of the Final – Mark Burns

Player of the Final – David Watson

Player of the Final – Mitch Younger

Player of the Final – Ramesh

ACST Players of the Day:

Phuket Sports: Day 2 results of the ITF at TSLC