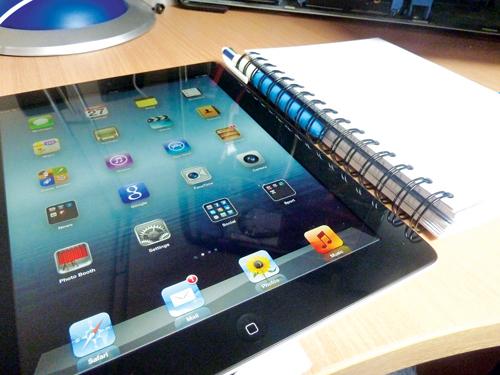 And the declines were substantial: somewhere between 11 and 14 per cent, depending on whom you believe. There’s a lot of baggage behind the numbers – they only measure shipments, they don’t count sales, and there’s no mention of returns, which are probably huge – but just on the face of it, that’s quite a comeuppance for the industry.

I’m not talking about Windows PCs. I’m talking about all PCs – including Macs, MacBooks, and the like. As of this writing, Apple hasn’t disclosed its first quarter sales numbers, but it’s clear that even the MacBook market has declined, possibly by 5 to 10 per cent.

Of course, the 800-pound gorilla driving all of this is the tablet and the smartphone. If you combine PCs, laptops, netbooks, ultrabooks, tablets and smartphones, sales numbers are increasing at an enormous rate: the computer industry’s never had such a good quarter.

But if you confine your stare to the traditional PC market, things are going to hell in a hand basket. Quickly.

A big part of the blame, in my opinion, is Windows 8. I’ve written and wailed and moaned and groaned about Windows 8 since we saw the final bits last August. Now that I’ve seen a leaked copy of the new Windows 8.a, code-named “Blue” I can confirm that things aren’t getting better. And I expect the PC market to go down the tubes, in part because of Win8’s poor showing. I’m on record as predicting that PC sales (inclusive of returns) will decline 20 per cent or more this year. When I first said that, people told me I was crazy. Now many of the same people are wondering if things won’t actually be worse. They may.

Here’s the thing. Tablets – iPads, and increasingly Samsung tabs and competing Android tablets – can do many, many things that people would normally use a computer to accomplish. It’s taken the industry three years to finally figure that out (the iPad is three years old), but it’s true, and consumers know it’s true: why lug around that three-kilo laptop when you can get the same stuff done better, faster, easier and cheaper with a little iPad?

I’ve been diving into Google Apps and Google Docs lately, and let me tell ya, they can’t do everything Word and Excel and PowerPoint can do – not by a long shot – but if all you want is to whip out a memo, run a few numbers, or make a simple presentation, the free Google Apps will probably do everything that you need.

For people accustomed to paying for software (ahem), going from a $1,000 laptop with a $200 copy of Microsoft Office to a $300 Android tablet (or even a $500 iPad) with $0 Google Docs just makes a whole lot of sense. Most people have a PC with Office on it anyway. If you really need Office, you can go back to the old dinosaur. But if you don’t need to write a book or balance the federal deficit, why bother with the big iron?

But wait a second. Now phones can do most of that stuff, too.

I carry around a Samsung Galaxy Tab II. At first, it felt like a brick. It still feels funny sticking the relative big phone to my ear to deal with a, you know, a phone call. Now, I don’t know what I’d do without it. Jot down notes; run to Wikipedia; check movie playing times; Skype; Twitter; maps with turn-by-turn voice directions; free apps for my bank account; stocks; follow Bitcoin prices; Facebook. And all of my email, contacts list and calendar, right there – synced via Google to my iPad, my PC, and my Mac – on a bloody telephone, wherever I go.

I don’t know how I ever lived without it, seriously.

The major American publishers report that last year, 25 per cent of their book sales were electronic. And you can bet that almost all of those books were destined to go to tablets – particularly the Kindle and Nook – or other mobile devices.

The future of the PC business in general, and traditional Windows in particular, doesn’t look good. I’ve been warning people about it for years, but the time’s finally come. Windows is done. Get over it. Learn how to use an iPad or an Android tablet (heck, if my two-year-old can do it, so can you).

I’ve been working with Windows since Windows 286, and Office since Word 1.0 (which predates Office by quite a bit). I’ve been writing about Microsoft products and the world of Windows for more than two decades. And I’m tellin’ ya, the age of Windows is over. Technology caught up with the old-fashioned desktops and laptops. In an attempt to catch up with the modern mobile world, Microsoft welded together their old desktop with a new telephone-like interface, to the detriment of both. Microsoft just heaped dirt on Windows’ grave with the travesty called Windows 8 – and they don’t show any signs of letting up; Windows 8.1 will probably be just as bad.

If you want to buy a Windows Phone, by all means, do so. If you’re tempted by a Windows tablet, though, make sure you know what you’re getting before you shell out the shekels.

And if you’re thinking about buying a new computer, don’t – get a tablet or a better phone. Sure, you’re going to want a Windows/Office computer sitting around somewhere, gathering dust, just in case (or an OS X computer, if you feel so inclined). But my days of buying new Windows computers are over, and I suggest you follow suit.

Except, well, I’ll reconsider when the new MacBook Air comes out. No sense being pedantic about it…

I’m very happy to announce that we’ve found a new owner for Sandwich Shoppe Patong, and it will continue just as it is, for years to come. Look for Patong computer clinic announcements in the near future.

Phuket Humor: In praise of sitting