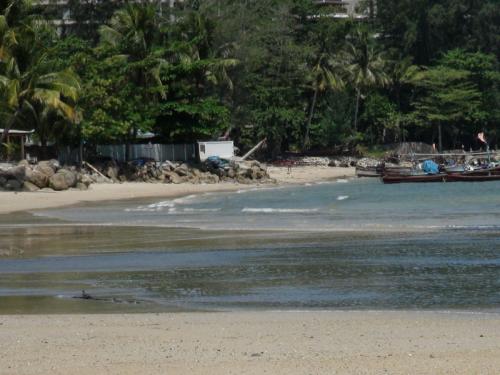 PHUKET: Dirty water emptied into the canal that separates Phuket’s Bang Tao and Layan Beaches has caused a spate of health problems and has even sent unsuspecting people to the hospital for skin rashes and blood infections, local residents claim.

To bring the issue to the public’s awareness, the Bang Tao Longtail Boat Club and local restaurant owner Chaiya Boonyuen on Sunday invited the press to inspect the contaminated canal, which they say is being polluted by hotels in the area.

Kaycha Krohlek, advisor to the longtail boat club, said the water in the canal had been polluted for a long time and had caused locals and tourists to fall ill.

The Cherng Talay Subdistrict Administrative Organization (OrBorTor) has been investigating the issue, but nothing has been done, Mr Kaycha claimed.

“The water smells and stops tourists from visiting here. Both tourists and locals have had allergic reactions to the water. Many local fishermen have had to get medical treatment – paid for out of their own pockets – to recover from exposure to the water.

“Some of them have had blood infections from the dirty water and yet still have to get into the water each day to get to their boats,” he said.

“The situation is getting worse. We haven’t been notified of any progress by the OrBorTor. They have held some meetings about this, but subdistrict and village headmen have never had a chance to attend any of those meetings,” Mr Kaycha said.

“I implore all government agencies, especially the Cherng Talay and Thalang administrations, as well as the provincial authorities, to take charge and quickly resolve this issue,” he said.

Billionaire’s bones: another skeleton in closet of alleged Phuket killer