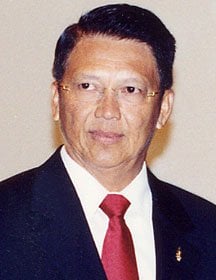 PHUKET TOWN: The Mayor of Phuket Town, Phummisak Hongsyok, speaking to reporters today, slammed government officials for talking about the rights and wrongs of tin mine concessions without first understanding the facts. Pol Maj Gen Pansiri Prapawat, Deputy Commissioner for General Investigation, said on June 20 that 17 tin mines had been checked. “We have found only one that was returned to the government at the end of the mining concession,” he told reporters. “Of the remainder, seven or eight have received illegal land papers or are incorrect in some other way. We need to investigate further.” Mayor Phummisak is also Managing Director of Anuphas and Sons Co Ltd, which owns four tin mines in Phuket. Some of these were on the list of 17. Asked by reporters for comment today, he stressed that the land had received a Chanote title in 1984, before tin was discovered beneath the land. “All four tin mines owned by Anuphas and Sons are the same – they have Chanote titles and belong to Anuphas. The Chanotes were issued by the Land Department. If you can’t trust the evidence of a government department, what can you do? “This will affect the economy in Phuket because all of that [government-certified] paper normally can be used as evidence of assets to show to financial institutions. This is a sensitive matter for the economic system and could cause uncertainty,” he added. “When people talk irresponsibly about taking land back for the government, they show that they don’t know the laws that apply to land.” One reporter, referring to Phuket’s lack of fresh water, asked him what he thought about government requests to pump water free from the Anuphas tin mines. “Here we have these irresponsible people who don’t know the facts. They say that the water belongs to the country and they don’t take into consideration what we have done for people. “The truth is that when water is found on private property, that means that the water belongs to the person who owns the property. “It makes me sad because we have Chanotes for these pieces of land and water is an asset of that land. But the company has given water to the people of Phuket for almost 20 years, completely free. Anuphas and other old tin mine companies have always cooperated with the municipality to solve Phuket’s water problems,” Mayor Phummisak said.