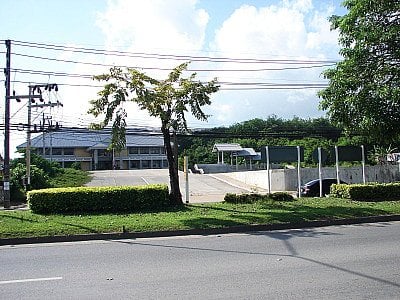 PHUKET: The Mayor of Rassada Municipality is set to file a complaint with the Administrative Court if the Thepkrasattri Road median strip is broken to accommodate the yet un-opened Phuket Bus Terminal 2.

Mayor Suratin Lianudom told the Phuket Gazette of his plans following an announcement made by Phuket Land Transport Office (PLTO) Chief Teerayout Prasertphol that the median strip in front of the terminal would be broken to allow bus operations to begin by October.

“I, along with other residents, live opposite Bus Terminal 2 and disagree with this decision. It will cause more traffic problems. We are just a small group but we should receive fair treatment,” Mr Suratin said on Wednesday.

“Why didn’t they hold a public hearing before beginning construction? It isn’t right to look for a solution to traffic problems [in front of the terminal] after construction is completed,” he added.

“We already filed complaint letters with the transport office and Governor Tri Augkaradacha on the behalf of villagers. If they insist on altering the median strip, I will not hesitate in filing a complaint with the Administrative Court,” Mr Suratin said.

Phuket Provincial Highways Office Chief (PPHO) Arun Sanae said on the same day that the plans for altering the median strip were already finished and they were waiting for budget approval from the PPHO director-general by the end of this fiscal year.

“We have already submitted the layout plans and need about three million baht to complete them. We should receive the money from this year’s remaining fiscal budget and aim to start the project before October 1,” Mr Arun said.

PLTO Chief Teerayout explained that Thepkrasattri Rd was under the authority of the PPHO and it was not within his right to organize a public hearing. He echoed Mr Arun’s statement that the project was being pushed for a pre-October start.

Mr Suratin, however, suggested an alternative use for the still-vacant facility:

“I would like to use the building as a Rassada Municipal school, which would benefit our community by providing education. Moreover, the terminal is in an overcrowded area – it should be moved further away from [Phuket] Town,” he said.

Phuket dive boat ‘did not capsize’