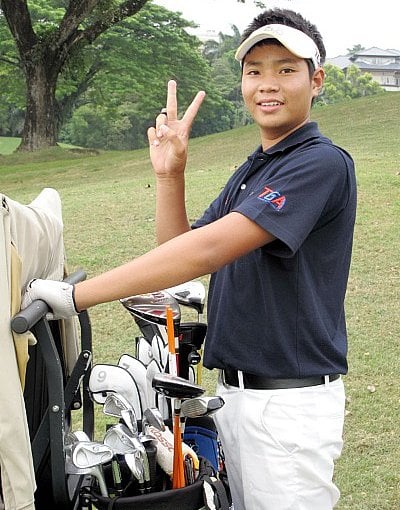 A two-under-par third round of 70 secured Pariwat a final score of 211 and joint-second place with two other players: Danny Hopoi from Hawaii and Corey Shaun from the US.

The three young golf stars each finished on five under par for the tournament.

The 13-14 year age category in which Pariwat competed was won by Zecheng Dou from the US. His consistent play earned him an eight-under-par 208 final score – three shots ahead of the trio in second place.

Pariwat also played consistent golf and deserved to stand alone in second. His three solid rounds included a level par 72, and twice he shot under par with 69 and 70.

Hopoi shot an exceptional final round of 67 after a two-over 74 on the first day and 70 on the second. Shaun was slightly more balanced than his compatriot, carding 69, 73 and 69.

Another Thai player, Thanyathorn Saengpongnapa, placed ninth with a final score of 216. A disappointing finish for the youngster after he blew away the field in the first round with a stunning eight-under-par 64.

“His mother, father, family and friends are very pleased with Pariwat’s performance at these Junior World Championships and are looking forward to welcoming him home to Thailand later in the week,” Prachuab said.

Prachuab had initially set Pariwat a target of finishing in the top three, and with this success the young golfer will return to Thailand to join the national squad at a training camp in Khon Kaen.