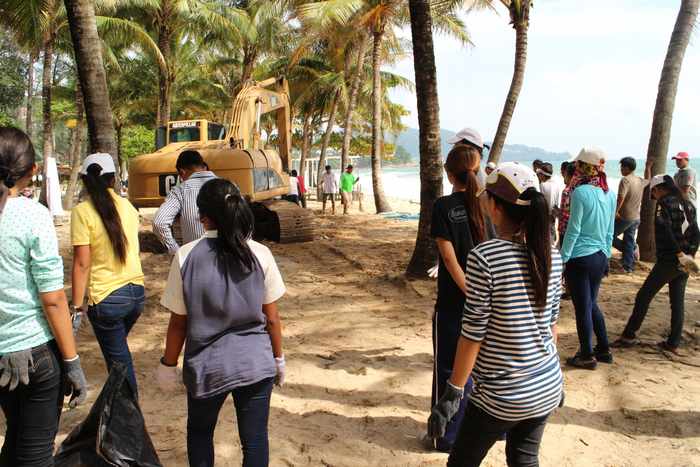 PHUKET: In an exclusive interview with the Phuket Gazette, Cherng Talay Mayor Ma-ann Samran this afternoon denied English-language reports in Phuket that buildings on the east side of the beachfront path at Surin Beach would be demolished.

The news comes amid a flurry of reports about the demolition of beach club structures encroaching on the sand at the beach as the seven-day deadline for business operators to remove all structures from the public land expired today (story here).

“Those buildings on the east side of the path at Surin Beach are fine. They are guaranteed to be legal; the Cherng Talay Tambon Administration Organization [OrBorTor] built them itself and rented them out to operators,” Mayor Ma-ann said.

“What I did say [at a Provincial Hall meeting yesterday] was that if the Army asked us to pull them down, we would have to – but at this stage we have received no such order to do so.”

Cherng Talay Police Superintendent Paworn Pornpromma, quoted in one Phuket news report, also denied citations of him saying that there was a “chance” of the east-side buildings being torn down.

“I did not say that businesses on that side of the road might be demolished,” Col Paworn told the Gazette.

“I said that we would have to report to the military [administration] that those buildings had not been pulled down, because we [the Cherng Talay Police] must file reports of our actions to the Army each and every day.

“I am prepared to answer to the Army if they ask me why only one side was pulled down. The answer is: those other buildings [on the east side] are legal. Only the buildings on the beachfront side of the path are to be removed.”

The penalties were announced by Phuket Vice Governor Chamroen Tipayapongtada when he launched his “clear the beaches” campaign in Kamala two weeks ago, as reported on the front page of the June 7 issue of the Gazette (story here).

Mayor Ma-ann today reiterated that some leniency would be granted, as the operators were given short notice to remove sturdy structures, including a concrete terrace complete with an infinity-edge swimming pool just meters from the shore.

Meanwhile, beach chair and umbrella rental operators have been banned from returning to the beach.

“We ordered all of them to stop. This includes all the legal vendors who previously had permits to rent out beach chairs and umbrellas,” Mr Ma-ann said.

“At this stage, we’re not considering allowing any beach chair and umbrella operators back. However, we are thinking about allowing vendors to sell more traditional products, such as handmade batik, to tourists instead.

“This will help spread the income generated from tourists among local villagers who need to make a living.”

Some operators tried reclaiming beachfront areas by placing removable tables and chairs on plots in front of their main venues.

“Officers did not wait to ask the operators to remove them. We did that for them,” Mr Ma-ann said.

However, Mr Ma-ann did note that he understood why such businesses were popular with tourists and foreigners living in Phuket. He also acknowledged the burden on business owners: “I know that this destruction will mean a loss to the businesses. We will discuss what can be done about that after the deadline has passed.”

All beach clubs contacted by the Gazette confirmed that parts of the clubs not encroaching on the beach were open as usual.

Seizing the opportunity to revel in the publicity, the popular Catch Beach Club started promoting its re-opening party, slated for June 21, under the banner, “Size doesn’t matter, it’s how you use it.”