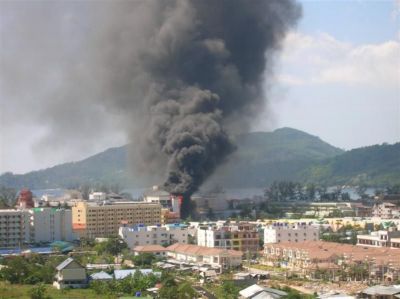 PATONG: Crowds gathered on Ruamjai Rd this afternoon as flames engulfed the corner section of The Courtyard hotel, formerly known as the Grand Tropicana Phuket and now owned by Marriott.

“The fire started about 2 pm and took firefighters about 30 minutes to put out,” Kathu Police Superintendent Col Grissak Songmoonnak told the Gazette.

“We believe that a spark from workers carrying out construction might have ignited insulation and started the fire,” he said.

“We have no more information at this time. We are still investigating the cause of the fire. It is too early to put a value on the extent of the damage,” Col Grissak added.

The Phuket Grand Tropicana hotel made headlines in February last year after several guests contracted legionnaires’ disease, which was found in the hotel’s cooling system.