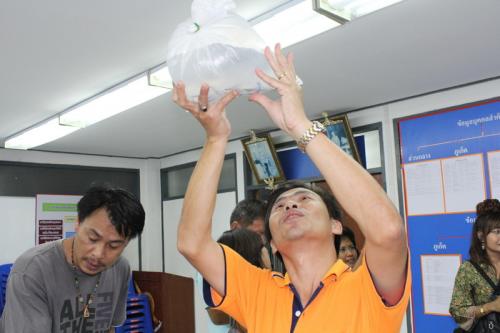 PHUKET: A local resident in Rawai, at the southern end of Phuket, was arrested yesterday trying to smuggle more than 200 protected-species fish to Bangkok.

Marine Police and Department of Marine and Coastal Resources (DMCR) Region 5 office in Phuket arrested Boonsuan Raknawa, 41, after officers received information about protected fish being smuggled to Bangkok via a public bus.

The specific types of fish Mr Boonsuan was caught with are protected along the Andaman coast, Col Montri explained.

“Catching these particular fish is banned in Phuket, Phang Nga and Krabi waters,” he explained.

Mr Boonsuan was arrested after officers caught him waiting at a PTT gas station on Thepkrasattri Road in Rassada with the fish packed into plastic bags inside Styrofoam boxes on his pickup truck, ready to be loaded onto a bus to Bangkok.

“The suspect was charged with a wrongful act under the Enhancement and Conservation of National Environmental Quality Act, B.E. 2535 [also called ‘NEQA 1992’]. The penalty is up to one year imprisonment or a fine of up to 100,000 baht,” Col Montri said.

However, Mr Boonsuan claimed he was only a “delivery man” and was paid 1,000 baht for every delivery he made, Col Montri added.

DMCR Phuket Chief Thanate Mannoi said that fish smuggling was likely to increase because of demand from customers who love breeding rare fish.

“Even though the street value of the fish is not high, the cost to natural resources is damaging,” he said.

“On December 31, we seized 117 pieces of coral and 107 of sleepy goby fish at Tah Chat Chai [at the northern tip of Phuket]. However, the suspect or suspects were not caught,” Mr Thanate said.

“People need to know not to catch these types of fish as it affects the local ecosystems,” he added.