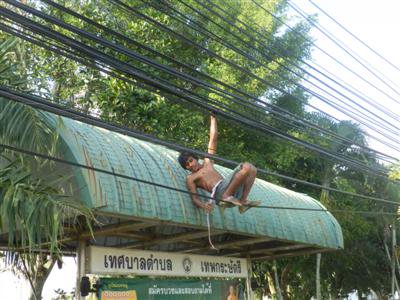 PHUKET: A man in search of food sent shivers up the spines of Phuket residents yesterday, when he began dangling from power cables strung up above a bus stop in Thalang District.

Thalang Police were notified of the man’s strange behavior at about 4:30pm.

Arriving at the site, in front of the TAT office opposite the municipal market on Ban Don Road in Thepkrasattri, they found the man crawling on the zinc roof of the bus stop, reaching into the trees, apparently in search of some fruit to eat.

From there he electrified the growing crowd – but fortunately not himself – by maneuvering into a lattice of electric cables.

The performance lasted about 10 minutes, until he was finally coaxed to come down and accept some khao phad (fried rice) offered by a concerned local resident.

Police tried to question the man, but found him incomprehensible.

The man was often seen walking along Ban Don Road scavenging for food from rubbish bins and often slept at the bus stop, local residents said.

Nobody knew his name or real place of residence, if any.

Despite the fact that the man’s actions were clearly dangerous to himself, and possibly others, there was no attempt to bring in social workers to get him the help he obviously needs.

Phuket does offer some refuge for the homeless through Mitr Maitree House, located at 74/168 Phuket City Home Village, off Ruampattana Road in Rassada. The primary goal of the center is to give temporary care to migrant workers from other provinces who fall on hard times – and help them get in touch with relatives and return home.