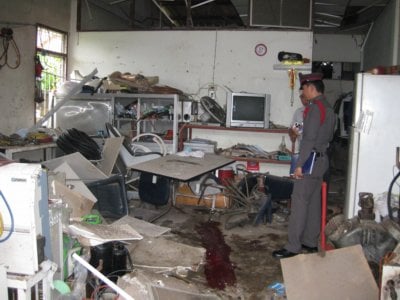 PHUKET: An explosion this morning at an air-conditioning service shop in Phuket has seriously injured two men and caused extensive damage to the single-story shophouse.

According to police at the scene, a large gas tank used for servicing air-conditioning units exploded in the shop at about 10am. The shop’s owner is reported to have had his leg blown off in the explosion. Both the injured men were taken to Vachira Phuket Hospital.

The explosion also caused extensive damage to the walls and roof of the single-story shophouse, which has been operating in Koh Sireh for about three years.

According to a neighbor who rushed to help the victims, the shop’s owner, Mr Wanchai, had already lost a leg in a similar accident about two years ago.