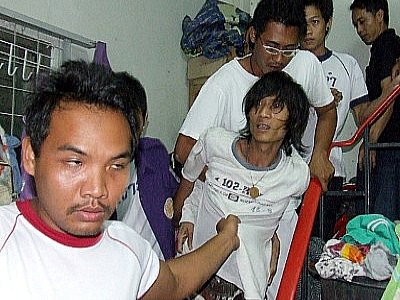 PHUKET: Traffic screeched to a halt on Phisit Gorani Road near Patong Temple about 7pm yesterday as motorists and other passers-by watched a team of Phuket rescue workers snatch a man from the ledge of a three-story building while he was preparing himself to jump.

The man, 25-year-old tattoo artist Surasak Buranaphanit, later told Phuket police he was being hunted by “powerful men” trying to gun him down.

“We saw Surasak running around the building about 6pm,” said Lek Manop, a shop vendor in the building.

Describing Mr Surasak’s frantic efforts to get to the top of the building, Mr Lek said, “He looked like he was on drugs.”

Police, Kusuldham Rescue Foundation workers and officers from the Patong Department of Disaster Prevention and Mitigation soon arrived to try to convince Mr Surasak not to jump.

During their attempts, Mr Surasak kept yelling that he had “a problem” and repeatedly stepped out onto the ledge, indicating to the rescue team that he was serious in his intent.

Meanwhile, the crowd of onlookers and motorists below continued to grow.

After about 30 minutes of talking with Mr Surasak, the rescue team distracted him and then rushed to retrieve him from the ledge.

He was then taken to Patong Police Station.

Police officer Lt Patapee Srichai told the Phuket Gazette that during questioning Mr Surasak told police that for the past two days he was being chased by a group of “powerful men” who were trying to shoot him.

“He wanted people to help him, so he climbed on top of the building so people would notice him and help him,” Lt Patapee said.

Lt Patapee asked Mr Surasak, who is originally from Chumphon province, to call his sister to come to Phuket and pick him up.

No criminal charges were filed against Mr Surasak over the incident.