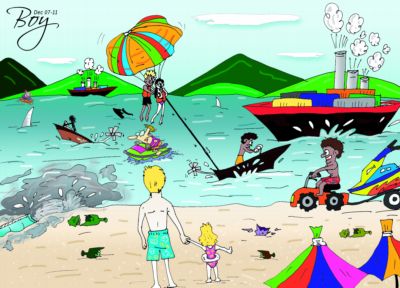 PHUKET: Given the events that have occurred at Phuket’s beaches in recent weeks, it is difficult to ascertain which is the greater maritime threat: natural phenomena such as the rough monsoon seas that claim the lives of scores of overconfident swimmers every year – or the juvenile carnival that gets underway when the winds subside and the beach business operators return to the water with the same recklessness that we suffer on our roads.

In the latest catastrophe, the holiday of Russian tourist Nikolai Nefedov came to a horrific end last Friday afternoon when he was struck off Kata Beach by the propeller of a speedboat used to tow airborne tourists under para-sails. (See front page story, current issue of the Phuket Gazette. Digital subscribers click here to download the full issue.)

The incident re-exposed long-standing problems with the behavior of the many cowboys who operate beach businesses on the island with little or no regulation, and with roughly the same amount of common sense.

Mr Nefedov was reportedly a strong swimmer who attempted to dive to safety when the terrifying boat came at him. While the dive may have saved his life, it did not spare him multiple fractures, deep cuts, bruises and a partially severed leg.

The fact that he was among a group of swimmers in shallow water clearly indicates that the speedboat failed to even use a spotter. Witnesses said the boat operator was alone at the time of the incident, and that he hesitated before returning to assist the Russian aboard.

Then, after dropping his victim on the beach, he promptly fled the scene, as is common practice in road accidents here.

Writing from Russia, Mr Nefedov’s daughter Ilya contacted the Phuket Gazette to ask that we “trace the development of the incident in order to avoid similar accidents” in the future. Her message suggests disbelief that such an accident could happen here, and reveals a notion that it was a one-off, whereas it was, in fact, far from unique.

Sadly, this was not a case of breached safety protocols. At most popular Phuket beaches, the lack of clear markings as to where vessels can approach shore, coupled with an almost complete lack of oversight and enforcement of law, makes it difficult to believe that such accidents do not occur far more often than they do.

Although the law requires that boat operators – even jet-ski drivers – hold a Thai captain’s license, it is common knowledge that few do. And the regulations with regard to licensing and insurance are violated daily on a wholesale basis.

It is very important that the authorities now find and charge with negligence the operator of the speedboat that struck Mr Nefedov. It should not be difficult to find him as his colleagues at the beach know who he is.

Finally, it’s time for the marine police to come out of hiding. They need to switch allegiances to the public and begin to put teeth into the laws on boat safety and operator licensing – and to do so in the most visible manner possible. Without this, continued injuries and deaths at the beach are guaranteed.

Phuket Opinion: Amid the many bus and van crashes killing tourists in Phuket, it’s time to focus more carefully on responsibility