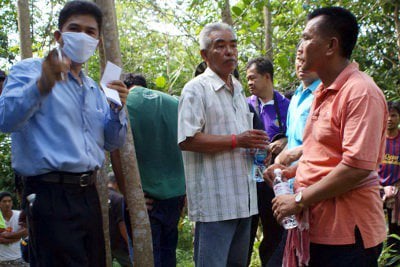 PHUKET: The owner of the elephant found mutilated in Krabi on Thursday has confessed to working the animal to death.

Local villagers had discovered the gruesome remains, now identified as that of 49-year-old elephant Plai Boonam. The front of the head had been hacked off and the elephant’s tusk was missing.

In response, Krabi Muang District Chief Yutisak Akeakkara and Wiboon Lerdwattnasombut, chief of the Krabi Livestock Office, launched an investigation into the cause of death of the pachyderm.

The owner was found to be 57-year-old Seri Srisuk, who told the officials that Plai Boonan had died from exhaustion.

“It was hot and he worked hard for many days,” said Mr Seri, whose name literally translates as “Freedom”.

“I removed the tusk and I will make sure the body is buried so it does not disturb the villagers,” he also said.

Local villagers had previously reported that the elephant had only one tusk before it died.

Mr Wiboon said that as Plai Boonam was legally owned, there was nothing else his office could do.