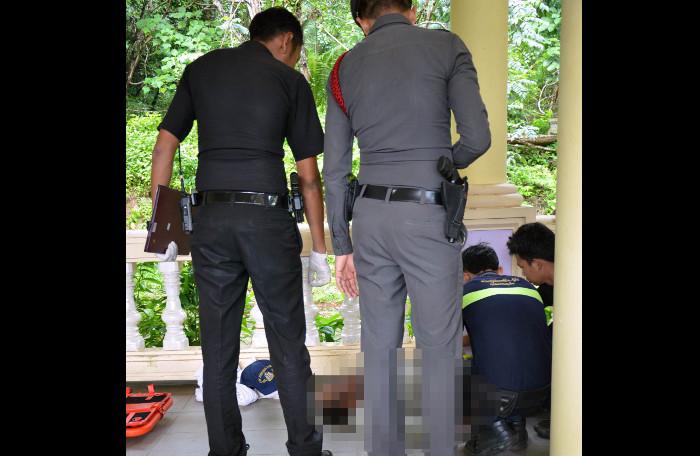 PHUKET: A 53-year-old Thai man was found hanged by his neck from a concrete pillar in a Phuket Town temple yesterday.

Lt Surachart Tongyai of Phuket City Police received word that a body, later identified as Charan Nakhanat, had been found at about 4:30pm and accompanied Kusoldharm Rescue workers to the scene.

“We found the body of Mr Charan at Kosit Temple, sitting with his back against a pillar, to which he was hanging by a length of cloth wrapped around his neck,” said Lt Surachart. “There was also a bottle of alcohol lying nearby and a mobile phone clipped to the waist of his pants.”

“His wallet was in his pants, which included his ID card, driver’s license, other documents and his keys. There was no evidence of violence to the body, which appeared to have been deceased for about an hour before we arrived.”

“According to his friends and relatives, Mr Charan was having financial trouble and was under a large amount of stress,” Lt Surachart told the Phuket Gazette. “He had temporarily pawned off his pick-up truck to a friend, but wasn’t able to retrieve it due to a lack of money.”

“He was known to drink alcohol and was said to be under a lot more stress than usual the past few days.”

Police said they will continue investigating the Mr Charan’s death in order to rule out foul play.

Pick-up slams into pole, splits in half