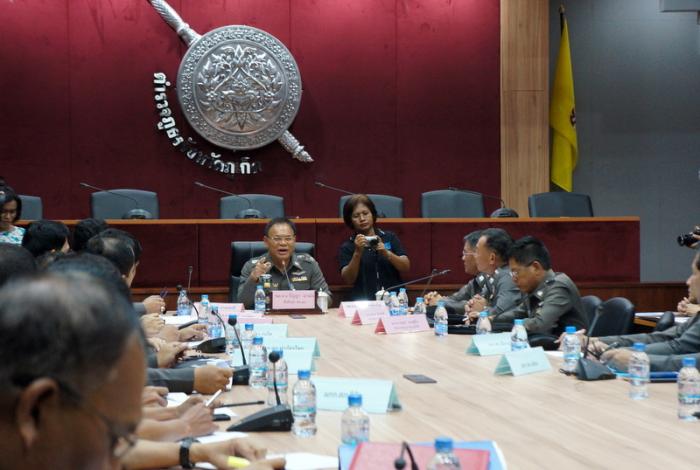 PHUKET: Royal Thai Police believe a group of thieves that have so far stolen more than 12 million baht from ATMs around the country to be Europeans based in Phuket.

Police believe that an ATM located in Wichit was used to perpetrate the nationwide fraud. Royal Thai Police’s General Panya Maman briefed reporters on the extent of the losses while inspecting the ATM.

“Our initial findings point to this ATM being used as a master controller,” Gen Panya told the journalists congregated around him. “We found that this machine linked to and controlled two other ATMs in Surat Thani Province.”

“This group apparently used an electronic card from England to withdraw money from the ATM,” he said. “They appear to have inserted the card and used a loophole in the machines’ network to trick the machine into giving out cash.”

Police stated that they believe the group used this technique to steal 1 million baht from five ATMs in Wichit and Thalang in Phuket. Part of the group then flew to Bangkok and repeatedly exploited machines at Bang Na, Rangsit and the Sukhumvit area. Another group reportedly left Phuket in a rental car and took cash out of ATMs in Chumphon, Prachuap Khiri Khan and Phetchaburi provinces.

Police are collecting evidence on both the vehicles used by the suspects.

“We can see the faces of some of the suspects and have a clear picture of some of their vehicles from CCTV footage but we are hoping to retrieve better images as we continue investigations,” Gen Panya said.

Police also examined two Government Savings Bank ATMs yesterday afternoon; one located in front of J&P Supermart in Mai Khao, the other at the CP Fresh Mart on Sakdidet Road on the way to Cape Panwa in Wichit.

The Nation reported that police suspect at least 21 ATMs were hacked, resulting in more than 12 million baht being stolen. Another 200 ATMs are believed to have been infected.

“We believe there are several suspects involved and that they are European nationals,” Gen Panya said. “They used three vehicles to perpetrate their scams: a white Fortuner, a white Vios, and a white Civic.”

Police believe the scamming started in Phang Nga Province in March this year, where the group allegedly stole 4.5 million baht from ATMs, before making their way to Phuket around mid-July, where the suspects reportedly scammed ATMs at a CP Fresh Mart.

“We would like to urge car renters that may have had a vehicle returned during that time period and have found that their vehicle has driven through one of those provinces via GPS to please come forward,” Gen Panya added.