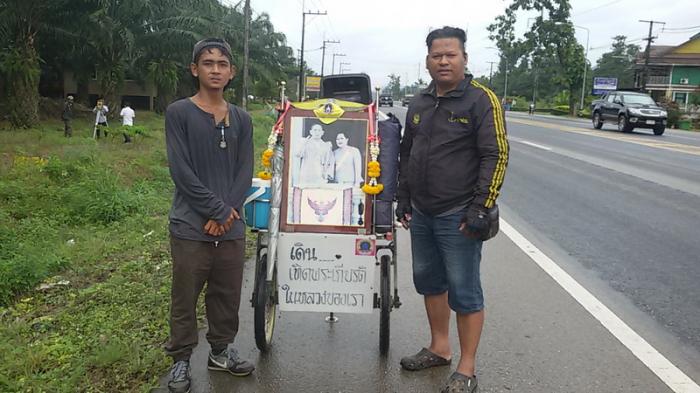 KRABI: A man from Phitsanulok Province passed through Krabi yesterday after setting out from his home province on foot six months ago, determined to walk the length and breadth of the country, passing through all 76 provinces, in honor of His Majesty King Bhumibol.

Chuthipong Saetan, 24, began his walk from the province in northern Central Thailand with the aim of covering the entire country on foot to end up in Bangkok on December 5, to mark the King’s birthday.

It was while on the southern leg of his march that he learned of the His Majesty’s death last week. However, Mr Chuthipong vowed to continue his walk to the capital and reach the Grand Palace by December so he can pay his respects to the departed Monarch.

A tearful Mr Chuthipong was clearly overwhelmed by the news of the King’s passing. “I was very upset to hear that the King has gone. I can’t say much,” he said. “Actually, the aim of my trip was to pay homage to the king and make a blessing for him on Father’s Day, December 5.”

“All that has changed now. When I arrive in Bangkok, it will be to mourn instead. I never ever expected it to turn out this way,” said Mr Chuthipong.

Mr Chuthipong told the Phuket Gazette that kind-hearted people have supported him all the way since he set out from home more than five months ago.

“I made a promise to myself that I would be a good person and follow all the teachings of the King. One of my objectives is to do my best to protect all the trees that the King planted,” he said.

The walk’s purpose is now to express mourning for the King instead, and he promised that his next mission is to protect the trees that His Majesty grew from being damaged.