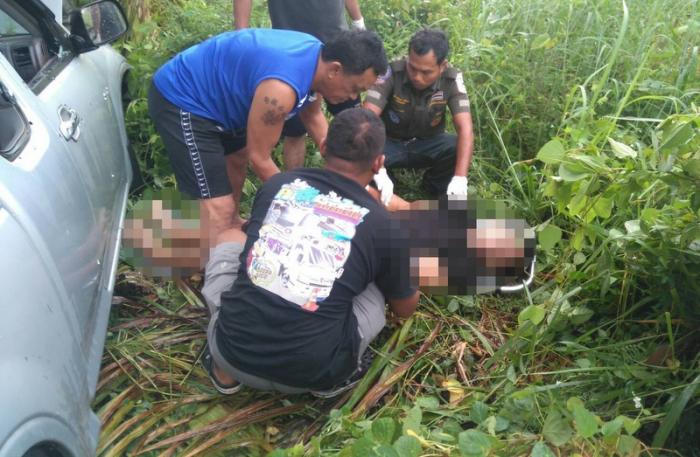 KRABI: Police are hunting for unknown suspects who murdered a man and injured his wife in a drive-by shooting on Phet Kasem Road in Krabi this morning.

The suspects pulled up next to the driver’s side of a pick-up truck driven by 50-year-old Thana Pisan. He and his wife, Sirikul Sirikunyawattana, 46, were travelling back from a Krabi Town fresh market after buying supplies for their restaurant in the Khlong Thom area.

The suspects reportedly fired at the couple several times, causing their pick-up to crash, and drove off.

Police found several 9mm and ten M16 bullet casings nearby. They believe a love triangle could be the motive behind the shootings.

“We found at least 10 bullet holes in the driver’s side window,” said Maj Somporn Songsaeng of Khlong Thom Police. “Mr Thana was already dead when we arrived, and Ms Sirikul had a gunshot wound in her right thigh.”

Both victims were taken to Khlong Thom Hospital.

“They came out of nowhere. I don’t remember the model of the car. The drove away right after the shooting,” Ms Sirikul said.

“We believe Mr Thana was the only target. However, we will continue our investigation into the case,” said Maj Somporn.