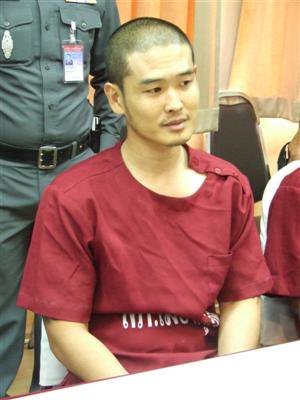 PHUKET CITY: The son of the owners of a popular car repair chain has been arrested for allegedly shooting another man in the back inside the KorTorMor nightclub at 1 am on January 1, bringing New Year’s festivities there to an abrupt end.

Mr Pinyo, the owner of a curtain shop, was taken to hospital and is recovering from his wounds.

Mr Sombat, whose parents own the Manit Center Max chain of car repair shops, handed himself in at Phuket City Police Station at around 4 pm on January 1.

He has been charged with attempted murder and weapons offenses, all of which he denies, and released on bail.

The gun used in the crime was not one of his and someone else carried out the shooting, Mr Sombat maintains.

In a bid to prove this, Mr Sombat brought with him to the station his own collection of seven firearms.

Police have submitted a report on the incident to Phuket Governor Preecha Ruangjan, requesting that the club be closed down for a minimum of 30 days.

In a sad irony, the name “KorTorMor” is a Thai acronym for Krungthep Maha Nakhon, or Bangkok.

The shooting took place just about one hour after the blaze that killed 59 people at the Santika Pub in the capital.

In order to prevent a similar fire tragedy from happening in Phuket, Police Commander Apirak Hongtong and Governor Preecha will establish a new committee tasked with ensuring that all nightclubs on the island conform with current fire safety laws established back in 1966.

The last major nightclub fire in Phuket was in March 2006, when the three-story Crocodile Disco off Bangla Rd in Patong was completely gutted in a pre-dawn blaze that caused 40 million baht in damages but no loss of life.