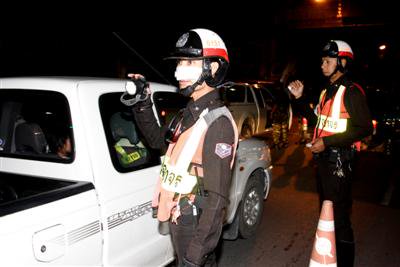 PHUKET CITY: Two people, including a foreigner, died in road accidents in Phuket during the first three days of the government’s “7 Days of Danger” road safety campaign that began on December 30.

Nattadawan Maneerangsrisuwan, an officer at the provincial Road Safety Center, set up by the Department of Disaster Prevention and Mitigation (DDPM-Phuket), said the first casualty reported was that of Mr Fausto Franco, a 35-year-old from Italy.

Mr Franco was hit by a car as he was driving a motorbike along the beach road in Karon at about 12:30 am. He was rushed to Patong Hospital and was pronounced dead at 2:16 am, Ms Nattadawan said.

The second casualty came at 2.35 am on December 31 when a Ford pickup lost control, hit a power pole and flipped over. The accident occurred on the bypass road northbound, south of the turnoff road to Sapam.

Dead at the scene from head, neck and rib injuries was 19-year-old Kanokwan Maithong, a native of Trang’s Muang Disrict. The three other occupants of the car were injured, one seriously.

The driver, whom police reported as drunk, was charged with reckless driving resulting in the death of another person. The four women were returning home from a party in Phuket City when she lost control of the pickup where the bypass road narrows, north of the Tesco Lotus intersection.

There were no reported deaths on New Year’s Day or as of 3 pm today, Ms Nattadawan said.

Remarkably, the number of deaths over the first three-and-a-half days is actually lower than the usual rate. On average, one person loses his life per day on Phuket roads throughout the year, she confirmed.

Part of this relative success is due to 355 people – including police, DDPM staff, volunteers and emergency response personnel – working nine police checkpoints on the island around the clock throughout the 7-day period.

Statistics released by the center for the first three days showed that there were 38 accidents reported, the majority (32 cases) involving motorbikes. Most accidents were in Muang District (27 cases) with fewer reports from Thalang (9) and Kathu (2).

In total, 25,825 people were called over for inspections, resulting in 3,093 road traffic violations. The top violation was for driving without a license (1,338 cases), followed by not wearing a seatbelt in a car (689), not wearing a crash helmet while operating a motorbike (680), and driving an illegally modified motorbike (169). Some 217 were charged with drunk driving, which is a criminal offense.

On Thursday alone there were 851 road accidents, killing 88 people and injuring 909 others.