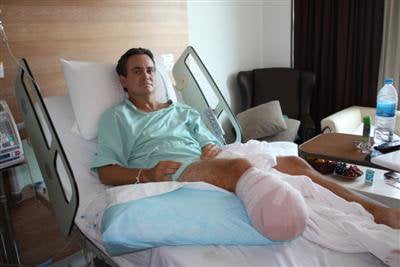 PHUKET TOWN: Cathay Pacific airline pilot Scott McDonald is trying to put his life back together after his lower calf and foot were sliced off by a speeding motorbike in a freak accident in Phuket late last month.

As the American lay bleeding on the pavement, a passerby who witnessed the accident used the victim’s cellphone to call for help – before pocketing the device and fleeing the scene.

Mr McDonald has undergone seven surgeries at Bangkok Hospital Phuket since the accident.

He is hoping a prosthetic calf and foot will allow him to resume his career and continue to indulge in his great love – golf.

The accident happened shortly after midnight on January 24.

Chicago-native McDonald, 43, was heading up Thepkrasattri Road towards his home at Yacht Haven when his cell phone rang.

He stopped his Harley Davidson Fatboy by the side of the road, just north of Blue Canyon Country Club.

Turning the parking light on and still straddling the bike, he answered the cellphone. As he suspected, it was his girlfriend Wan calling to ask him when he would return home.

He told Wan he would be home in ten minutes. “Just as I was saying that, wham. I got slammed from behind. I thought it was a car that hit me, it was so loud.”

What hit the American was a speeding Honda Dream ridden by two Thai men. “I think it was going at at least 100kmh,” Mr McDonald said.

His foot was sliced clean off above the ankle.

“I just remember being thrown and then crawling over as far left as I could on the road because I thought I was gonna get hit by a car now. And from there I don’t really remember a lot. I was in shock,” he said.

Wan was still listening, horrified, on the cellphone. “I heard screaming, ‘Ah! Ah! Ah!’. Then quiet.”

Mr McDonald’s memories of the accident are hazy, though he can remember asking someone who rushed to the scene to call Wan.

After telling Wan where the accident scene was, that person disappeared – with Mr McDonald’s cellphone in hand. It has not been returned.

By the time Wan arrived, Kusoldharm Foundation workers had already taken Mr McDonald to Bangkok Hospital Phuket, where he continues to receive treatment.

He immediately faced the difficult decision of whether to have his foot, now infected, sown back on or surgically amputated above the existing wound.

“The prosthetics they can make are very up to par these days,” he said.

“They told me just the first or second day afterwards, ‘Remember your career is not over with Cathay Pacific’.”

At the time of writing Mr McDonald, an eight year resident of Phuket, was due to have his leg sown up on February 4. Despite the loss of the foot, he said he still plans to go through with his plan to marry Wan.

The driver of the motorbike that hit Mr McDonald, and his passenger, are receiving treatment at Vachira Hospital Phuket.

Inspector Sarit Budnongsang of Tah Chat Chai Police said an investigation was underway to discover who was at fault.

Paddlers go for gold in Phuket