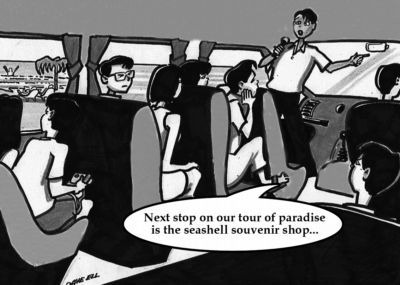 PHUKET: Plans by the Tourism Authority of Thailand (TAT) and three tourism business associations to stop ‘zero tour fare’ operators from setting up in Phuket are laudable, especially given the damage such outfits have already done to the inbound Chinese market in places like Chiang Mai and Pattaya. (See story here.)

Often run out of Bangkok, zero fare tour operators pay foreign travel agencies on a ‘per head’ basis – typically US$50 or US$100 – for each tourist they bring in.

The operators provide the tourists with free accommodation, but to recoup their expenses they take their ‘guests’ on ‘special’ sightseeing tours and shopping sprees, using coercion and reportedly even threats to get the tourists to spend money.

The tour operators make back their costs and exact their profits from (undisclosed) commissions, thus ensuring there is almost no let-up in the high-pressure tactics the captive tourists are forced to endure.

The net result is a holiday hell for the victims, who are held virtually hostage in a foreign land, not knowing where to turn for help and in some cases being abandoned.

Zero tour fare operators have been a major source of complaints to the Chinese government, which last year moved to stop the practice by making it illegal for travel agencies in that country to fly out tourists who have not seen their itinerary details in advance.

Unfortunately, some operators continue the practice – at the expense of Thailand’s reputation in what should be its fastest growing market. As a result, overall tourist arrival figures from China have been falling in recent years, despite China’s strong economy and a number of other positive factors that should be making China the next great tourism frontier for Thailand.

Fortunately, Phuket has largely been spared of zero fare tour operators, in large part because hotels here are generally too expensive for the operators to deal with. In fact, Phuket province has uniquely been enjoying steady growth in tourist arrivals from China, thanks to an increase in the number of direct  flights to the island from Chinese cities.

In another positive development, relatively more Chinese visitors are coming here as independent tourists, freeing themselves of package tours altogether. More Chinese than ever came for last October’s Phuket Vegetarian Festival, eager to catch a glimpse of authentic Chinese cultural traditions that were passed on from generation to generation, unaffected by the Cultural Revolution that destroyed so much of China’s own cultural heritage.

With China currently suffering a gender imbalance of 120 males for every 100 females, the TAT might also wish to consider the future impact of this ratio on tourism here….

OPINION: In defense of Phuket tourism