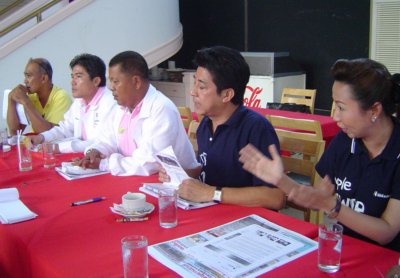 The six politicians charged that the PEC’s joint staging of an “anti-vote-buying” activity with the Phuket Provincial Administration Organization (OrBorJor) on Monday demonstrated the panel’s bias towards the locally-powerful Democrat Party, whose members control the OrBorJor.

The six said that the recent PEC event, during which 200 yellow helmets were distributed to motorcycle taxi drivers, had sparked distrust of the PEC and cast doubt over its ability to conduct a free and fair general election on December 23.

“Today we have come here as a group to plead for fairness from the EC. Our PPP legal representatives will lodge a formal request to the EC, asking it to change the PEC membership within seven days. If we get no reply we will raise this as a campaign issue directly with the people of Phuket, asking them to see for themselves how the Democrats campaign,” K. Wisut said.

Chart Thai candidate Sgt Sorranan said, “We don’t want to shout, but we need fairness from the PEC in this election. Will they give it to us or not?”

Ruamjai Thai Chart Pattana party list candidate Suksan Kasetkala said, “We need the EC to investigate whether the PEC and OrBorJor are working together to support one party or not. We are not getting fair treatment.”

A common complaint is that billboards put up by the OrBorJor as part of its publicity campaigns in the past have included images of K. Anchalee and the logo of the Democrat Party, K. Suksan said.

Puea Pandin candidate Wisut Janjira said it was unfair that while EC rules forbid candidates from conducting activities such as donating wreaths at funerals, its own local branch had jointly organized a free handout of motorcycle helmets together with a local government body whose top administrator is a high-profile Democrat Party member.

“We do understand that it is the responsibility of local administrations to conduct campaigns encouraging people to vote, but we think the PEC needs to demonstrate more discretion. Right now we all feel it is unfair,” he said.

Phuket V/Gov Tri told the media yesterday he never intended to do anything unfair by taking part in the helmet giveaway. The event was only intended to encourage people to vote and discourage them from selling votes, he said.

OrBorJor Vice-President Sutin Uthaitamrong, a former Kathu District Chief who is not affiliated with any political party, told the Gazette that the helmet giveaway was one of a handful of activities organized as part of the Governor’s policy to encourage people to vote.

Failure to take part would have been tantamount to dereliction of duty, he said.

Of note in the current election campaign is that PPP candidate Dr Sriyada, who used her maiden surname Palimapan in previous runs to win a parliamentary seat, has now chosen to run as Sriyada Shinawatra in the current campaign.