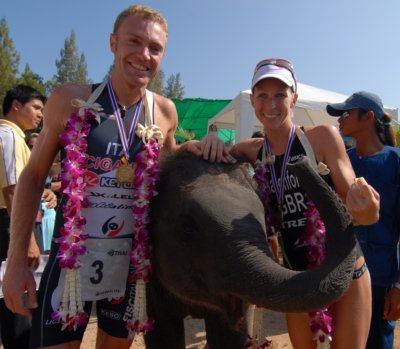 CHERNG TALAY: Massimo Cigana from Venice and Briton Liz Blatchford ran, swam and cycled their way to the front of a throng of about 700 athletes from 44 countries at this year’s Laguna Phuket Triathlon on December 2.

The race began at the Laguna Beach Resort’s beachfront, with the first wave of competitors setting off at 7 am, followed 10 minutes later by the second wave.

The day began with a 1.8-kilometer swim, first completing a leg in the Andaman Sea and then across a beachside lagoon. Italian Leonardo Bellerini was first out of the water in the men’s race, completing the swim leg in 22 minutes, 15 seconds. Mathieu O’Halloran form Canada and Al-Sultan were close behind.

Massimo Cigana powered his way through the field during the 55km cycle, taking in the Phuket countryside and pulling away from second-place Richie Cunningham from Australia. Cigana was off his bike and on his feet for the 12km run after 1:21:05. Meanwhile, Bryan Rhodes from New Zealand had edged his way into third place.

Cigana secured the title and the US$3,000 prize money with a winning time of 2:31:46. Cunningham finished second, while Al-Sultan clawed on to third place.

In the women’s race, after a strong swim Liz Blatchford found herself in third place after the bike ride, trailing behind Australians Belinda Granger and Carfrae as the women began the 12km run.

After a nine-month hiatus recovering from a spine operation, Blatchford was in top form and fought her way back into first place, completing the course in 2:42:24. Carfrae finished in second place, folowed by Granger in third.

On the same day, Herbalife International (Thailand) Ltd held a relay race with some 60 teams from organizations in Phuket and Bangkok competing.

The Tequila Gang team took the title this year, with Alastair McAlpine, Mathhew McMeekin and Alexander Ward completing the course in 2:38:01.

MP candidates call for local election commission to be replaced