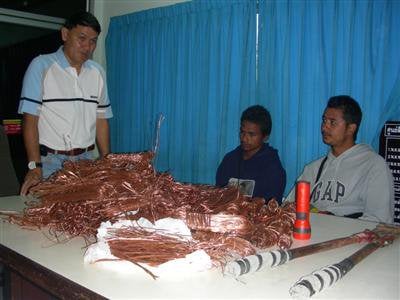 CHALONG: Chalong Police have arrested two suspects for late-night thefts of electric cable that left homes in Rawai and Chalong in blackout over the past month.

The thieves were presented to the media by Chalong Police Investigtions Inspector Lt Col Suchart Suwanpirom, who led the investigation and subsequent arrests.

Presented on a table before the pair was some of the 44 kilograms of copper wire the two men had stripped from various locations across the island’s south end, along with the insulated wire-cutters and flashlight they used.

Both men confessed to stealing copper wire for sale to a junk shop on Sakdidet Rd in Phuket City for 180- 200 baht/kg, Col Suchart said.

The arrests followed the theft at 3 am on November 22 of the main electric power cable leading to the home of Sommai Damrongkitkarnwong, located opposite the Rising Sun Residence on Soi Sainamyen, off Chao Fa West Rd in Chalong Village 6.

Led by Lt Col Suchart, police rushed to the scene to find a great deal of stripped copper wire. The thieves barely manged to escape on foot, but left behind a key piece of evidence: a Honda Wave motorbike legally registered to Mana.

A check with the Phuket Transport Office led to the November 28 arrest of Mana at his home in Chalong Village 3.

He confessed to the crime and identified Sansern as his partner, who was arrested shortly thereafter at his girlfriend’s home in Rawai Village 6.

After their arrest the pair showed police how they wrapped the handles of the large cable-cutters with cloth to avoid electrocution.

They also confessed to carrying out similar crimes, including the theft at about 3 am on October 30 of about 30 kilograms of copper from a location along the the access road to Baan Krating Resort at Ao Sane, Rawai.

That haul netted the pair about 7,000 baht after they sold it at the Kanlaya Secondhand Shop on Sakdidet Rd in Phuket City. The 44 kilograms sold after their November 22 theft netted them about 8,000 baht, they said.

Both men have been charged with vandalism and robbery.

MP candidates call for local election commission to be replaced