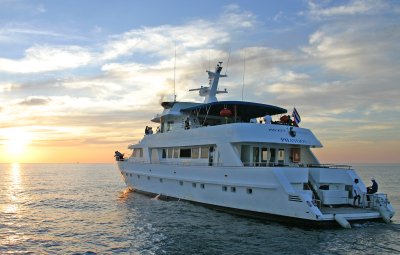 PHUKET: The luxury charter yacht Phayoon 3 was grounded off the southern coast of Phuket early this morning after the vessel began taking on water in heavy seas.

The 130-foot motor yacht, which is operated by Kingfisher Marine, came back from a season based in Singapore in October, and was on the way to pick up passengers from Myanmar.

So far not much is known about why the yacht started taking on water, Scott Kingston, son of the company’s principal, Jean Kingston, told the Gazette.

“We’re still assessing the actual situation. They grounded her. Jean is just now diving underneath to assess damage.”

Rough seas appeared to have played a part in Phayoon 3‘s troubles, Scott said. “She started taking on quite a bit of water. There were about two-meter swells, which we’ve handled before – when we went up to the Andaman [& Nicobar Islands] we were taking bigger waves than that.

“But I think it was the direction of the swell, coming in from aft, and she started taking on water through one of the hatches. That’s as much as I know at the moment.

“After I get a report back, we’ll issue a formal statement as to what exactly has happened.”

The boat is currently grounded off Laem Phromthep. There were no passengers on board at the time, and all crew were unharmed.

Patong cracks down on street touts