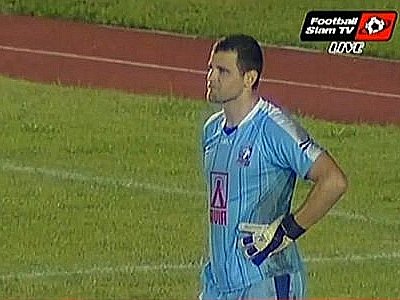 PHUKET: FC Phuket continued their poor performance away from home yesterday with a 1-1 draw against Air Force United (AF Utd).

The seven yellow cards issued were not indicative of a bad-tempered encounter, but reflected the game’s tempo and spirited challenges from both teams, aware that results are now crucial.

A minute later, FC Phuket’s debutant goalkeeper Leuchar Juntuang was called on to easily field a shot by Ratchapark Duangfah.

FC Phuket dominated possession and began hitting the target midway through the first half. Sarach Yooyen struck a low rasping drive on 19 minutes, but AF Utd goalkeeper Daewara Korrid got down quickly to save what looked an almost-certain goal.

Two minutes into the second half, FC Phuket’s Nithirot Sokuma was shown a yellow card for a professional foul.

FC Phuket were punished further when the resulting free kick was driven towards their near post.

AF Utd’s Krisana Taiwan was already moving to the ball and edged in front of FC Phuket’s bewildered defense to direct his header into the top right corner, billowing the net exactly on 48 minutes.

Second-half action was focused in the midfield until Leuchar brilliantly parried a shot on 61 minutes to give FC Phuket a chance to counterattack.

A low cross from the left 30 seconds later found the outstretched boot of Watcharapong, who directed the ball into the net at Korrid’s near post.

After his first game in charge of FC Phuket, Sompong Wattana is hopeful of improvement and suggested the result was a positive step for the club.

“This draw is a very satisfactory result for me as I have only been coach of this team for five days and we are still focusing on finding the tactics that suit our players best.

“Taking a goal away from this match means that we have not come away empty-handed. From here we just need to focus on finding the right direction for the team as a whole and hope that we can make a comeback,” he said.

Buriram FC, who defeated FC Phuket at Surakul Stadium last week, exchanged positions at the top of the league with Big Bang Chulalongkorn FC (BBC FC) after a 3-0 home win.

Equal on 39 points, Buriram (GD+10) are now ahead of BBC FC (GD+6) because of their better goal difference.

Other results from TPL division one over the weekend:

FC Phuket’s next game is at home against Chainat FC (Hornbills) on Saturday, June 11.

Chainat also gained promotion to league division one with FC Phuket last year, but are enjoying a more successful campaign in fourth place.

For league standings and more information pick up the next issue of the next Phuket Gazette.

Phuket Police to lead the way to free, fair election