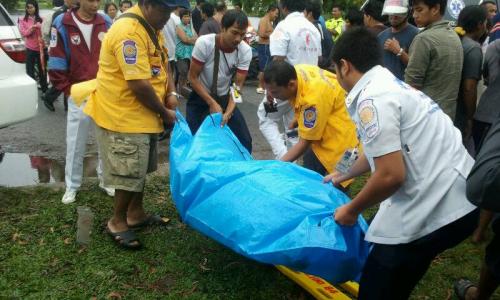 PHUKET: The body of a local fisherman feared drowned was pulled out of a lagoon by rescue divers in Cherng Talay yesterday.

Daorueng Lekon, 41, was last seen at about 5pm on Wednesday, walking into the water to place a fish trap in the pond, said Sub Lt Prasert Tongphrom of the Cherng Talay Police.

“Villagers said he always went fishing at the lagoon,” he said,

About 9am yesterday, however, villagers saw Mr Daorueng’s hat floating on the water. His flip-flops and motorbike with sidecar were still parked nearby.

“The villagers called out and searched for him, but he could not be found, so they called the police,” Sub Lt Prasert said.

Kusoldham Foundation rescue divers arrived to assist in the search. After about 30 minutes, they recovered the body.

“Mr Daorueng might have suffered from a cramp, because he spent a long time in the water catching fish” Sub Lt Prasert suggested.

The body was taken to Thalang Hospital to confirm the cause of death, he added.