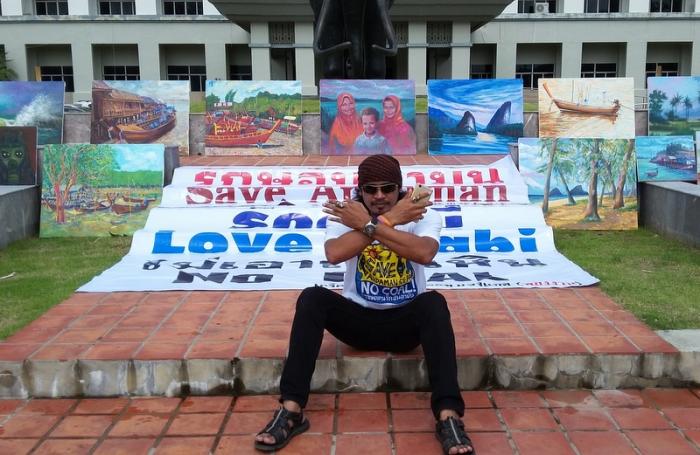 KRABI: Twenty artists gathered at Krabi Provincial Hall to stage a peaceful protest on Thursday morning against a coal power plant slated to be built in the Nua Khlong District.

Vasan Sitthiket, an artist and activist who is part of the group, painted landscapes depicting how locals in the area would be affected by the plant.

“We went to the area that will be a coal plant and painted 26 pictures of people’s lives in Baan Laemhin,” he said. “We showed those paintings to the government so they can at least see how beautiful it is and realize how the coal plant construction will impact it.”

“We strongly believe that once the plant is built, the area will lose all its natural beauty and locals’ lives will be negatively affected,” he added.

Some of the paintings were given to locals, while some are to be taken to Bangkok to showcase at exhibitions.

Greenpeace representatives have staged similar protests in the past (story here).

In October 2014, hundreds of Krabi residents stood together against a proposed coal-fired power plant at a public hearing. The protesters claimed that the meetings were setups and locals were not being heard (story here).

Krabi Vice Governor Somkuan Khanngern met with the artists and said he would bring the matter to the attention of Krabi Governor Pinit Boonlert. The artists then left provincial hall without incident.