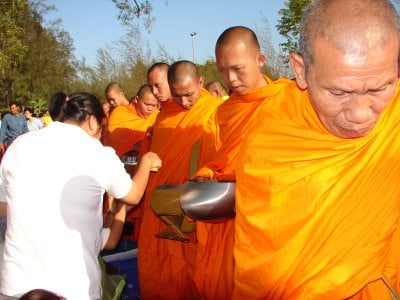 PHUKET CITY: The Seu See Khao (White Media for Peace) Club and Kanlayanamitr Club have been soliciting donations of food and money for Buddhist monks in the Deep South who are unable to collect food alms themselves due to fear of attacks by extremists.

Food offerings were collected by 109 monks from Phuket who walked a path through Saphan Hin yesterday from 6:30 am to 8 am. About 2,000 Buddhists in the area donated dry food such as rice, instant noodles, medicine, canned fish, drinking water and milk.

The offerings are to be handed over to 266 temples in Songkhla, Yala, Pattani and Narathiwat at a ceremony in Songkhla on February 24.