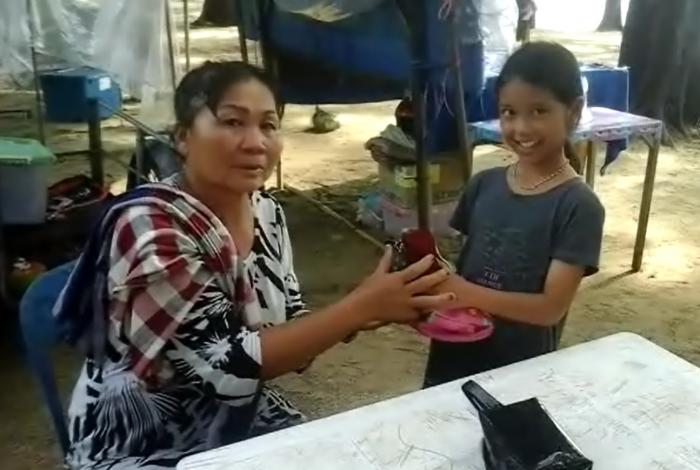 PHUKET: A nine-year-old girl received a reward for returning a bag containing 130,000 baht in cash and 90 grams of gold yesterday afternoon.

Piyarat Boonkek and her parents met with 55-year-old Nukhlia Sangkaew, the owner of the bag at Kamala Police Station to return it.

Ms Nukhlia told Police officers that at about 2:30pm she withdrew the cash from the bank and planned to pay a hospital bill. On her way back home, she got caught in heavy rain, during which the bag may have fallen on the road.

When she realized that her bag was missing, she reportedly fainted. When she woke up, she backtracked her route on her motorbike twice, but to no avail. That’s when, she said, she received a phone call from Ms Piyarat’s parents regarding her missing bag.

“When the rain stopped, I found the bag on the Kamala Beach road and took it to my parents so they could return it. They walked around the beach looking for the owner, and found a beach vendor who was her relative – she contacted Ms Nukhlia,” Ms Piyarat told Phuket Gazette reporters.

“When I received the phone call, I was so happy that I cried. I gave her 2,000 baht for her act of kindness,” said Ms Nukhlia.