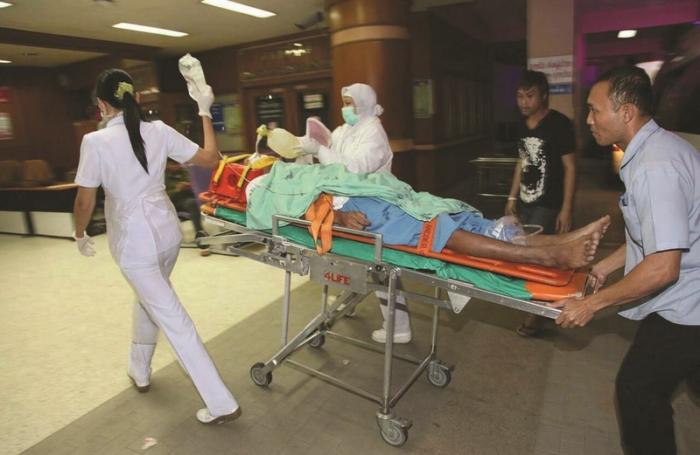 PHUKET: There is no lack of evidence about the alarming number of tourist deaths in the ‘Land of Smiles’. According to the ‘Bureau of Prevention and Assistance in Tourist Fraud’, there was a whopping 54 per cent increase in tourist deaths in 2015 (latest data available) as compared to 2014. This figure includes tourists only. The actual number including expats is likely higher, as can be seen in the statistics provided by the Farang Deaths project.

Private hospitals in Phuket were asked to answer the same questions referred to in this article, but they declined to participate in the story.

The Australian Department of Foreign Affairs and Trade estimated that there were 109 deaths of Australians alone in Thailand between July 2014 and June 2015. Given the likelihood that a foreigner might be injured in Phuket, clear protocols on uninsured foreign patients are surprisingly missing.

According to Methavee Maneesri of Vachira Phuket Hospital, when foreign patients are unable to pay their bills, the hospital has to absorb the expenses. Last year alone, the hospital wrote off 4.3 million baht of unpaid bills incurred by foreign patients. Over the last nine years, Vachira Phuket Hospital says it has written off more than 24 million baht in such losses.

“Due to medical ethics, we do not pick and choose patients before we initiate life-saving treatment. The questions of payment and insurance coverage are always secondary to saving patients’ lives,” said Ms Methavee. However, patients with non-life-threatening conditions will be asked to show proper insurance coverage or make an adequate deposit before treatment is administered.

“Given the large amount of annual write-offs for saving critical foreign patients, it simply doesn’t make sense for us to shoulder the cost of treatments that patients should be able to pay with proper insurance coverage. After all, these are conditions that are not dangerous to life in the near future. Even Thais have to show proper insurance coverage before the treatment can be initiated,” said Ms Methavee. Feeling the financial effects that uninsured foreign patients cause on the hospital’s bottom line, the international department, currently led by her, was established to handle the issue.

According to the National News Bureau of Thailand (NNT), medical treatments for emergency patients at hospitals within 72 hours of a patient’s arrival there, no longer incur any charges to such patients. This is a basic benefit for all Thai citizens.

Government Spokesman Lt Gen Sansern Kaewkamnerd says this Universal Coverage for Emergency Patients (UCEP) was put into effect from April 1 this year, allowing patients to undergo emergency treatments at any nearby hospital without payment for the first 72 hours.

The practice will adhere to the Ministry of Public Health’s regulations and protocol for emergency treatment costs. All hospitals in Thailand are obliged to follow the protocol.

Asked how the financial loss is being mitigated, Ms Methavee said that Vachira tries its best to contact the family and relatives of each patient. If the family members refuse to care for the patients or support them financially, the hospital ‘usually’ covers the expenses for life-threatening illnesses until the patient either expires or can be released. Most patients are released by either voluntary self-deportation or signing a debt agreement with the hospital.

A plea for help to embassies usually results in letters of appreciation with no monetary or personnel support, Ms Methavee explains.

“Sometimes, a patient in our care is unable to go back to his home country, or is in a sufficiently serious condition to require a nurse aide. A lot of money is needed to arrange for such transportation. We are trying our best to budget for it,” said Ms Methavee.

While the protocols at Vachira are beneficial to foreign patients, those of other hospitals could be less so, she explained.

“Different hospitals have different procedures when a foreign patient with no health insurance is unable to pay the bill,” said Dr Weerasak Lawtongkum, vice director of Vachira.

Some cases could be construed as a total disregard for medical ethics when a hospital finds out that a foreign patient might not be able to the pay the bill.

Dr Weerasak gave an example of a case in which an illegal immigrant walked into another hospital’s emergency room with a knife wound in the abdomen.

Since the patient was not likely to be able to pay the bill, that hospital refused to provide the patient with care. Instead, he was put in an ambulance, driven to Vachira’s emergency room, and left there.

“They were fully capable of treating the serious injury. However, they did not want to shoulder the irrecoverable expense from doing so,” said Dr Weerasak.

In less extreme cases, many foreign patients are transferred from private hospitals to Vachira when their financial situations have become less than ideal.

“We use the rates announced by Thai Ministry of Public Health. The same government-subsidized rates apply to both Thais and foreigners. [This cheaper rate is] the reason private hospitals sometimes refer patients to us,” said Dr Weerasak.

Uninsured patients with serious illnesses who are transferred to Vachira eventually become a financial burden for the hospital.

Many countries around the world require that tourists entering their countries have health insurance. Members of the European Union or UAE are notable examples.

Given the recent push for Phuket to become a global premier travel destination, the government has to resolve the financial burden on the hospitals and set a clear protocol regarding uninsured foreigners.

Concrete steps need to be implemented to further the growth of Phuket into the celebrated tourist destination the government wants it to be.