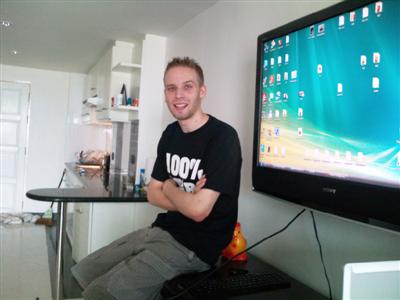 PHUKET: A Lithuanian man desperate to re-establish contact with his missing son is offering a 25,000-baht reward to anyone who can help him find the young man.

The father, 40-year-old Andrej Korkus, was at Kathu Police Station yesterday in search of his 24-year-old son who bears the same name.

Mr Korkus Sr said his son, his only child, went to Pattaya in April to study Thai language, but then left that city for Phuket together with a Thai man and woman.

Mr Korkus last talked to his son by telephone on April 27, when the youth confirmed he was in Patong.

The father replied by asking how much he needed and asking him to return home.

The conversation ended when the line went dead. He hasn’t heard from his son since, he said.

Speaking in heavily-accented English, Mr Korkus Sr said he believed his son should have about US$4,000 on him.

“His home with new friend, with Thai man, in Phuket,” he said.

Asked if the son might have intentionally removed himself from the two popular Internet services, he said, “My son, he’s my son. Why? Why?”

He did acknowledge that their last spoken exchange ended in an argument, however.

Mr Korkus’ quest to find his missing son started with visits to the international unit and Immigration Bureau of the Royal Thai Police in Bangkok, where he arrived on June 19.

Immigration officers investigated the complaint and learned that Mr Korkus Jr was living in Patong with a Thai girl.

Kathu Police managed to call the girl and arrange a meeting, but the woman continued to change her story about where she was living and when she would appear.

As of yesterday she has still not been questioned by police.

Mr Korkus Sr said: “You don’t know how much I spent money for five day looking for him. I didn’t still stay I just travel in everywhere.”

“I followed him step-by-step till I know my son living in Phuket.”

The father’s return flight was scheduled to leave last night, but Mr Korkus Sr is imploring anyone who knows his son’s whereabouts to contact the case officer at Kathu Police by calling 081-2720291.

He would return to Phuket at a later date if his son is found, he said.