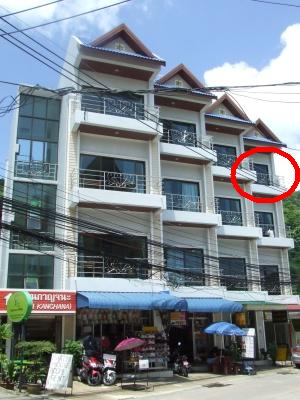 PHUKET: The expat operators of a Patong hotel have dismissed local media reports suggesting that an Australian man who plunged three floors to his death on the morning of June 10 took his own life following a World Cup dispute with a Thai girlfriend.

The death was most likely accidental, they said.

According to one media report, 29-year-old Shawn Morris fell off the balcony of his room at the Kanchana Guest House on Nanai Road after an argument about the World Cup with his “seasonal” Thai girlfriend, whose support of Germany caused friction in their relationship.

Antonio Pala, the 38-year-old Italian who operates the guest house with his South African wife Cisnthia Velopjara, said all evidence suggests Mr Morris accidentally fell from the hotel roof while trying to get back into the room after locking himself out of it.

“I saw this story and talked to his close friend who has since left because he was so upset. He confirmed that he didn’t have a girlfriend. The second thing is that Shawn didn’t care about football at all. The last thing, that Shawn came back every low season to see this girl, is not true at all.

Sometimes he came with family, sometimes with friends and sometimes with an Australian girlfriend. He also came in the high season as well as the low season. So this story is completely untrue in my opinion,” said the Italian.

Mr Morris greeted staff when he returned to the hotel at about 4am and called his friend at 4:15am to tell him he was back and safe. He fell at about 5am, he said.

“When I went inside the room with the police there were no other signs that others were present,” he said.

“He didn’t have any problems with anyone else. Okay, he drank too much, that’s true. Yes, he started drinking in the afternoons and had long drinking sessions. But my wife told me he talked to him the day before and he said he had a new job driving trucks in Australia, so I don’t think he committed suicide, nor do I think anybody killed him.”

Evidence suggests the fall was a tragic accident, he said.

“There is a metallic door on the roof open. It was open, but the day before it was closed. I was up on the roof the day before to put some silicone in one area that was leaking. But I closed it after, because it is raining every day so it cannot stay open. But when I came here in the morning it was open.

Also there was a piece of roof that was broken off, and pieces were near his body. Also, his room key was never recovered. So the most probable thing was that he came back at about 4am, then went out again for something later but then lost his key. So I think he tried to get into the room from the roof, but it was impossible and he fell,” he said.

“He was a very nice guy, very polite. Even when he was drunk he was still very polite and respectable, never talking too much. He always said hello when I saw him going out to do his laundry,” he said.