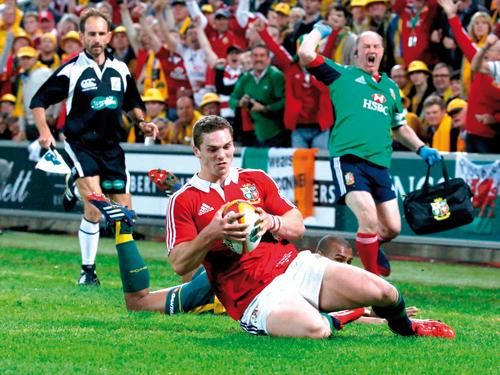 PHUKET: The first Test against Australia on June 22 turned out to be a ferocious confrontation. At times, the pitch resembled a battlefield. Though the Lions held the initiative for long periods, the Wallabies came back strongly in the second half, and were awarded a last minute penalty that would have settled a bruising encounter in their favor. In the event, Kurtley Beale’s kick dipped under the crossbar. Apparently he wore the wrong studs. 23-21 to the Lions.

A very relieved team thus retained their record of having never lost at Brisbane’s Suncorp Stadium, where 25,000 red-shirted supporters offered vociferous support. But history is not on the visitors’ side. The team that won the first Test on the previous two tours – in 1989 and 2001 – ended up losing the series.

The Lions led 13-12 at half time, courtesy of a marvelous George North try in which he collected a kick-off 10 meters inside his own half and beat three defenders to score wide out. “Mr. Reliable”, Leigh Halfpenny added two penalties. The Wallabies’ spirited response saw debutant wing Israel Folau, an ex Australian Rules player, score two spectacular tries, one from a superbly weighted grubber kick from scrum half Will Genia. In the second half, giant wing Alex Cuthbert, running a decisive angle onto Sexton’s pass, powered over for the visitors, but Kurtley Beale, who had taken over the Wallabies kicking duties from an out-of-sorts James O’Connor, twice brought the Wallabies to within two points. In a nail-biting finale, and despite winning a scrum against the head when the Lions threatened their line and then gaining a penalty within the Lion’s half, Beale could not deliver the “coup de grace”.

The match was remarkable for a number of unexpected features. All four tries were scored by mold-breaking, youthful, gargantuan wings, all between 6′ 4′ and 6′ 6′ in height, all in their early twenties, all weighing in at sixteen stones or more. Bizarrely, the Australian effort was hampered by a sequence of injuries, largely self-inflicted. When McCabe became the third Wallaby to be carried off within six minutes, the team were forced to switch wing-forward Hooper to center. Despite this, the Australian effort never flagged, and though the Lions were denied a North try by millimeters, the Wallabies pack finished the stronger. Pre-match talk that the unit would fold under pressure proved wide of the mark. With replacements on, the Lions lost three of their scrum feeds.

In the way of these things, some reputations were enhanced, others tarnished. Will Genia, widely regarded as the best scrum half in world rugby, had a fine game, eclipsing Mike Phillips. Too often tackled in possession, the Welshman’s slow pass and inaccurate box kicks will be a concern for the selectors. Fortunately for the visitors, James O’Connor had a forgettable game at fly half, missing penalties that would have won the game, and cramping his centers. It will be interesting to see if he swaps places with Kurtley Beale at full-back, or even forfeits his place in the side. The unpredictable Quade Cooper, another prodigal son and no favorite of coach Robbie Deans, may return as pivot. Captain Horwill, cited for stamping, will play.

Warren Gatland’s tactical brain will also have been exercised by one or two issues. Already he has complained of “poor game management.” The Lions’ back-row balance is not right, although the unit achieved parity in the rucks and won more breakdown ball. Heaslip and Croft, effective at the line outs, are not floor wrestlers. The front row struggled after Corbisiero and Jones departed, and the center combination of O’ Driscoll and Davies, two natural outside centers, did little in attack. O’Connell is out of the series with a fractured arm, though Tuilagi and Bowe should be available.

After Tuesday’s mid-week game, we shall be in a better position to read the minds of the selectors – and assess the walking wounded.

One thing is certain. A titanic second Test is in prospect.

The Lions play Australia in the second test today at 5pm, Phuket time.